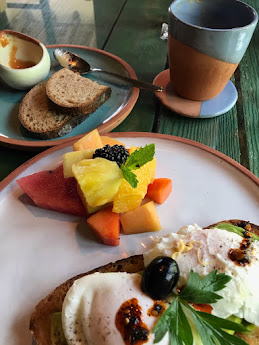 My trip home yesterday started out kind of typical, but ended on an unexpected high note. I dragged my luggage down to the rental car I'd picked up the night before, secured it in the trunk, took out the trash from the San Jose del Cabo AirBnB, took one last look around, then departed. I put the key back in the key locker and scrambled the code, messaged the owner that I was out, and then I…drove my car two blocks to a different parking space. Because I was worried someone might have seen me put my luggage in the trunk.

I was driving a VW Jetta from Alamo, but I had desperately wanted a Nissan March. They don’t exist in the US, so I had my eye on them since I’d spotted on my first day in Mexico. Alas, Alamo had no Nissan March for me. The March looks kind of like a Nissan Juke.
I stopped for brunch at my second-favorite bakery, then headed out to the hotel zone, an area I hadn’t explored. It’s what it sounds like—a bunch of hotels along the coast. I stopped in some stores, but my favorite part was when I parked in a parking structure, then tried to pay for my parking on the way out. The parking machine got really angry with me and beeped loudly. A nice Mexican lady came to help me, and she couldn’t make it work either. Finally she looked at my parking receipt and noticed I hadn’t been there more than an hour. “Gratis,” she said, shoving the receipt back at me.

I drove to a park at the end of the road, stopped at the ATM for some pesos (I like to have some spares in my Burbank stash so I don’t have to worry about getting money right when I cross into Mexico), and finally, headed north to the airport to drop off my Jetta and check in. 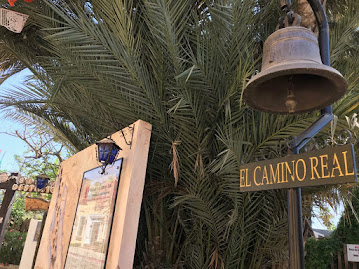 The airport did all kinds of annoying airport things, fairly typical of an airport. I emptied my water bottle, went through security, looked for a snack but the options were Sbarro, Subway, and Carl’s Jr, so that was icky. The flight back was two hours, and I used my Global Entry for the first time, and now I’m never going back to the queue. I waltzed right through.

I picked up my luggage and walked outside to an overcast day. I’ve been catching Lyfts to and from the airport during the pandemic instead of my usual Flyaway bus, and while it was a stretch to imagine the Flyaway is dangerous given I’d just assumed my vaccination status would protect me on two planes, four buses, and on the streets of Mexico for a week, I reasoned that my bag was kinda heavy and I didn’t really want to navigate public transit. So I wheeled my bag over to the ride-share lot next to Terminal 1.

I signed up for a Lyft via my mobile, and then I noticed I had a text alert.

I checked my Lyft status. No driver had accepted yet. I canceled the ride, walked back to Terminal 1, and that is how I ended up eating noodles on Sawtelle last night with Fletch and Eddy.

A good time was had by all.

Categories: Mexico, Pandemic, Travels with Myself

Always good to get home.