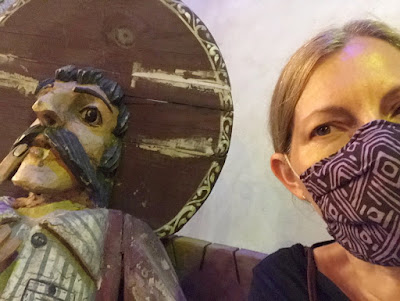 Yesterday was supposed to be a tricky day in San Jose del Cabo. Hotel check-out time was 11 a.m. and the AirBnB check-in time was 3 p.m. I’m trying to work as normal during my journeys, the point being one can be equally effective regardless of location, so long as one has a wifi connection and a company laptop. The goal is to never have to do this: “I’ll be offline for X hours in the middle of the workday due to poor planning, oh and did I mention I’m in Mexico, sorry.”

In other words, I want to do nothing to impede my future extreme-work-from-home ambitions.

The hotel didn’t have late check-out but was happy to let me work by the pool, and the AirBnB owner promised to text me as soon as the apartment was ready.

In the end, everything went smoothly. The apartment was ready by 11:30, so after a short time working by the pool, I left my luggage in the hotel storage room until a break in my meeting schedule, and walked up the hill to the AirBnB.

The apartment wifi was much stronger than the hotel's, the view was of town rooftops instead of the garden, and there was a marvelous bakery, La Esquina San José, practically next door. The only downside was having no pool, but I couldn't really use it during the workday anyway. 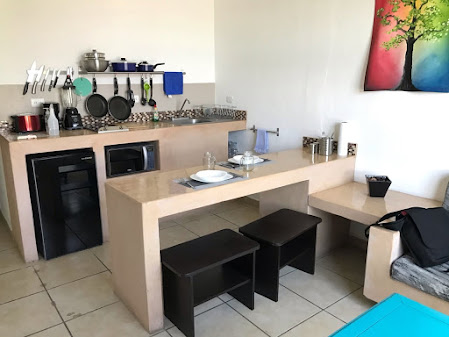 “Would you like the quiche for lunch? It comes with a cookie. Or I could make you a jamon baguette,” said the baker downstairs. She also sold the same pottery I’d bought at the bakery next to the hotel, plates by a La Paz ceramicist.

I took the quiche. I’ll get the baguette next time.

The transition of work-to-work was seamless and indistinguishable on the other end. I had a meeting that ran late, which was super-annoying since I’m an hour later here (so my workday ends at 7, except when it runs to 7:45, which bugs the shit out of me since I already think the 9-hour workday is uncivilized, yes, I know theoretically one of those hours is lunch, that’s how they get you), and then I had to scramble to get to the supermarket on time. I wanted to buy fruit and yogurt for breakfast since morning trips to get breakfast tended to take an hour here between ordering and waiting and paying the bill.

I walked back from Walmart (yes, Walmart is the closest supermarket) in the dark and picked up dinner at Mi Casa, a touristy courtyard restaurant across the street from the apartment. The apartment is great, the town adorable, the wifi strong, and the town has perfect avocados and mangoes. Life is not too bad here in San Jose del Cabo. 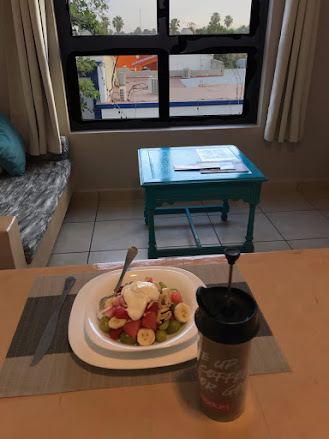 Categories: Mexico, Pandemic, Travels with Myself