Over the Hill - the Pandemic Edition

I'm vaccinated, all Pfizered up. I spent a week in Baja and earlier in the year, five weeks in Hawaii, and I haven't been shy about flying across the country...so today it was time to get back on the horse. 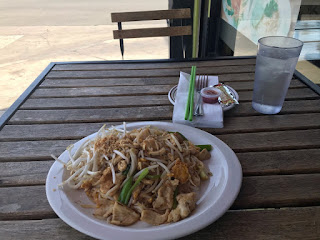 I hadn't been on the metro here since March of 2020. I haven't walked along Hollywood Boulevard or caught the 222 bus at Hollywood and Vine in that time as well. You all know I'm dedicated to public transportation. Why else would I not own a car in Los Angeles County? Time to walk the walk. Ride the ride.

I took the #155 bus to Universal for the metro Red Line, also called the B line now. I'll probably still call it the Red Line forever, the way old-timers in New York call the subway lines IRT or BMT. (You didn't think that was just a sandwich, did you?)
The train was filthy. Almost all the passengers were men, with a couple of raggedy sleeping men on each car. I wondered briefly if this might not be my best idea ever, but the doors closed and we were off to Hollywood. I disembarked at Hollywood and Western, walking alone through the station. A colorful sign at the top of the escalator advertised a bi-weekly farmers market. I crossed Hollywood Boulevard, expertly dodging a ranting man at a bus stop. I trekked up the block to Thai Town, had some pad thai at a tiny outdoors table. I was relieved the little carry-out I like had made it through the pandemic. Unfortunately, my favorite Thai massage place was closed. There's no way to know for now if it's closed forever. I only found one open, and there were no appointments for the next two hours. No Thai massage for Marie today! 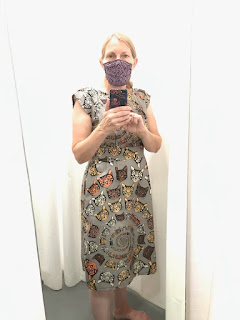 I walked all the way to Vermont and Sunset, sidestepping tents and another furious ranter, this time a woman. I thought I'd head up to the Observatory, which is closed but it was a nice day for a view. The Observatory bus isn't running though—not like there are tourists to cart up and down the hill—so instead, I jumped on a bus to Echo Park to go to Matrushka, the women's clothing store where I buy silly animal shirts. I picked up a few shirts, then caught a bus to DTLA. One of the passengers, clearly imbalanced, kept yelling at the driver—"When are we getting to Broadway?" At one point the driver pulled over, told the man to put on his mask, and refused to drive until the man stopped yelling. He did stop. For a few minutes, anyway. Then he kicked up a fuss again. "When are we getting to Broadway?"

Downtown was pretty bleak. Grand Central Market was partially open, as was the Spring Street Arcade, but many stores were boarded up or out of business. Plenty of people were walking along Hill, Broadway, and Spring, but not the gentrifiers. Where had all the wealthy hipsters gone, I wondered. Maybe they'd gotten out of town the way many New Yorkers had decamped to the Hudson Valley. Or maybe they were just going from their homes to their cars, or ordering in due to the pandemic. 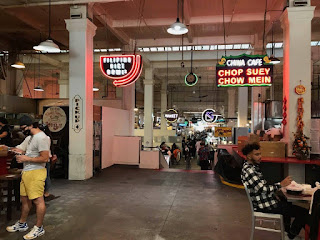 I made a big loop and walked up to 7th and Metro Center, caught the train back to Hollywood and Vine, and boarded the #222 bus back over the hill to Burbank.

I was a bit disconcerted by the day. LA was looking peaked...people still walked the streets. There is still traffic. But there are so many boarded-up stores, and transient encampments sprawl across places they never were before. I assume people have put up tents in what were once high-traffic areas--in the absence of busy foot traffic, people have taken up residence.

Which...I'm sure papers will be written on the last year. Books, articles. Did COVID ravage Skid Row and people moved to other parts of town? Are people still in Skid Row but the shelters became too infectious? There are movements to build tiny house shelters, but these things take time. 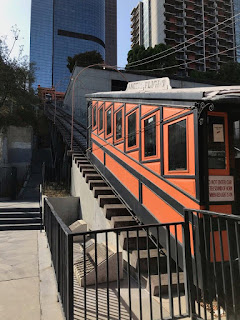 Los Angeles today felt like the setting for a movie about climate change. The setting for the first act of a movie where you just know it's not a romantic comedy or a feel-good movie where people come together to solve a problem. A horror movie, perhaps, or an adventure about a former cop who meets a dingo and drives a hotrod out into the desert. But it could just as easily be a movie set in 1970s New York City, and I'm more comfortable with that story, the story where diehard city-dwellers refuse to leave, adapting to new realities as they crop up. What are these new realities? I don't know anymore than anyone else. Will we ease back into our lives? Just over the hill, monied Burbank feels relatively normal. Last week, San Jose del Cabo was adorable and bustling. Was LA always so bleak? I don't think it was...though it's possible I had just adjusted and stopped noticing.

I'm curious to see what happens next, but I think I'm going to miss any immediate changes, since I'm heading back to Jersey City next week. I want to enjoy my time left before I have to go back to working in an office in Burbank, and by the time I come back to the west coast, Los Angeles will probably have moved on to evolve into whatever it's going to be.

A lot of change has happened because of covid. Most of it bad.