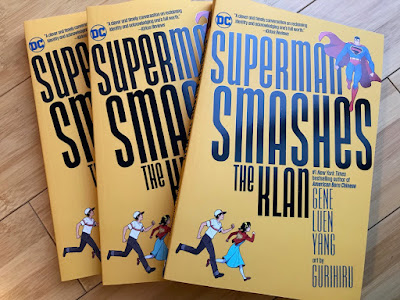 March, 2017. Emerald City Comic Con.  Boss and I met up with Gene Luen Yang. This wasn't our first meeting with Gene—he was already writing comics for us. But I'd had great results with the DC Super Hero Girls series I'd been producing for a few years, and we were ready to expand.

Boss and I leaned forward. Yes?

"And he smashes the Klan. It's based on the old radio show."

We both approved his idea on the spot. Sure, we still had to run it through the P&L process, but neither of us ever had a single doubt, and as anticipated, neither did anyone else.

Three years in the making, and the bound preliminary copies showed up today on my doorstep during social distancing lockdown.

I can't count the number of amazing books I've had the privilege to work on on one hand, but I can count them on two.

This is one of them.