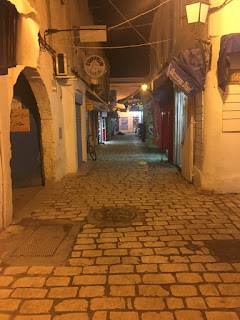 Another morning, another minibus.

I left my cheap-and-cheerful (and kind of cold and broken, to be honest) hotel right after the call to prayer echoed through the Houmt Souk medina. The sky wasn't light yet, and I thought about using my phone as a flashlight as I walked along the cobblestone alleys hoping to get out without a sprained ankle. But before I had the chance to worry much, I was out of the medina and along the regular paved road that led to the louage lot.

The ticket office hadn't opened for the day as I asked hooded men standing around which was the louage to Gabes. They motioned me into a minibus, which filled up with sleepy commuters in about ten minutes. We zipped off to the ferry as the sky brightened. 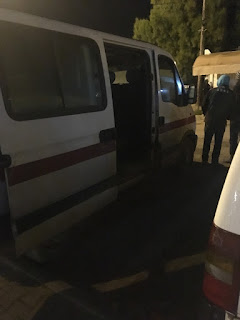 The trip to Gabes was short enough—an hour? Two?—and as we approached the outskirts of town, passengers started asking the driver to stop and let them out here and there. This emboldened me to keep an eye on my phone map, and when we turned near the gare, the train station, I asked the driver to stop.

"Nam. Le Gare. I go to le gare." I'd been speaking a horrific mix of bad French, worse Arabic, and amateur English while in Tunisia. I'd reasoned with myself it was better to speak badly in French and Arabic than to do constant charades, and it seemed to be working.

The driver let me out across the street from a coffee shop. Not like a Starbucks, but more like a place men hang out at night, smoking and bro-bonding. Ah, fuck it, I thought. I marched in and ordered a cappuccino to go, then walked over to the train station. I bought a first class ticket. A splurge! Maybe I'd have somewhere to plug in my phone in first class. 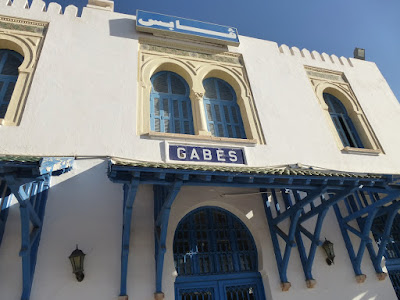