A month ago, I'd typed a Tunisia plan into a Word doc on my laptop.

Louage (share taxi) to Gabes, Matmata, old Matmata, then back to Matmata, Gabes, then to Medenine and back to Djerba.

Why had I done it in that order, I mused now as I made a last-minute swap in my itinerary. I left my hotel at quarter of six and headed to the louage terminal.

The sun had not risen yet and the station was dead.

That wasn't what I'd expected. I wondered if I'd just missed the six a.m. louages, or if maybe the day just hadn't really started yet. I walked across the street to the bus station and asked around.

A bus driver shook his head and started up a local bus. A pair of travelers sitting on a bench noted my request, talked among themselves, then motioned for me to follow. We all three went back to the louage station, where a transformation had occurred in the five minutes I'd been gone. The ticket booth was lit and open, and some minibuses engines were on.

I bought a ticket to Medenine and was motioned into a minibus. Ten minutes later, the eight seats were full and we pulled out, heading across the Roman causeway. 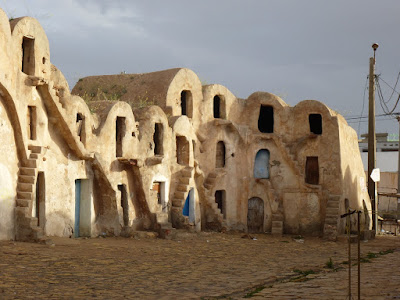 The Roman causeway was built in the 6th century BC, but it was damaged in 1551 during an escape by the corsair Dragut and his fleet, when they'd been hemmed in by the Spanish navy. They simply cut a canal through the causeway and escaped into the night. The causeway wasn't repaired until the French rebuilt it in 1953, atop the old Roman base.

That entire paragraph I just typed is suspect. Facts were thin on the ground, but there definitely was an old Roman causeway, updated in 1953, and my share taxi definitely took it to Medenine.

I was there to see Ksar Medenine, which was the easiest Mos Espa location to see via public transport. There are two other ksars used as Anakin Skywalker's home, but this was the one that I didn't need to take a guide and a car to visit. 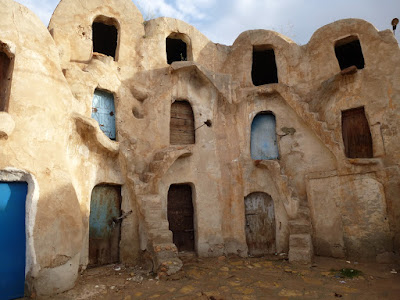 Disoriented from having no landmarks, I got out of the louage and asked the first person I saw.

They motioned me down to a roundabout. I asked someone else, got another wave, and hiked half a block before I realized this couldn't be right. I'd plugged the GPS coordinates into my phone ahead of time, so I fired it up and followed slowly, up a muddy lane to a vegetable market. I took a right down an alley—this was all highly suspect, but the ancient granaries unexpectedly lay before me. 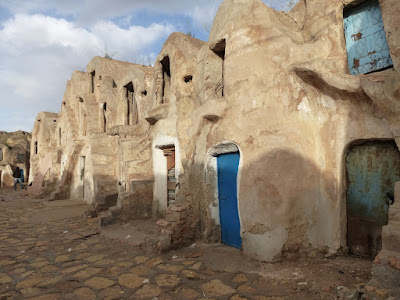 I was the only tourist, though there was a small group of six old men hanging out and smoking. I quickly realized this wasn't where I'd intended to go, but it was actually better. The right place looked like this, and I was somewhere less visited. Later, I'd realize this was one of the Anakin Skywalker sets, but that didn't matter anyway. What mattered was this decaying alley of ghorfas was not exactly in the guidebook. Well, nothing much was in any of my guidebooks since the newest of them was nine years old, printed before the Arab Spring.

The morning light on the ghorfas was stunning, completely amazing, and I paced around shooting photos hoping that somehow, my Lumix would capture the moment. Finally, knowing I still had to get to Luke Skywalker's childhood home and the cantina of Mos Eisley today, I headed through the vegetable market back to the louage station.

A man told me to take a taxi. Oh. I walked across the street to the bus station, where a different man actually put me in a taxi and told him where to go. I was getting my travel legs back.

Minutes later, I was across town, getting into a different minibus, this one headed to Gabes. 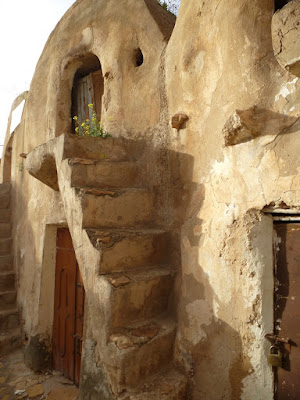 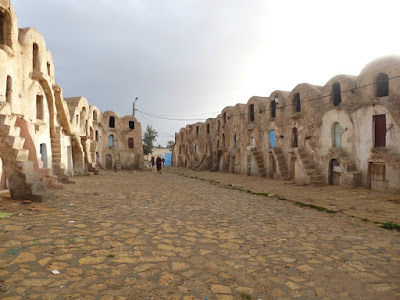 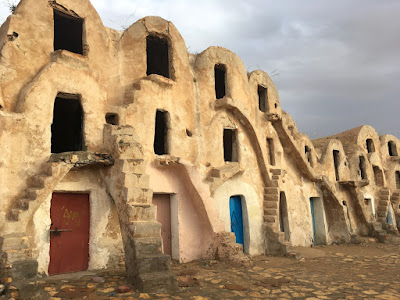