Many years ago, there was only one way to get in. You had to haul your butt uptown to wait in line all day. This was no problem, as my then BF (a then-unemployed fellow whose later fame means I can't even give him an accurate nickname, so let's just call him Drag-My-Ass-All-Over-Town-to-see-Michael-Powell-and-Godard... no, how about something shorter... like LP for Learn-to-Plow) was devoted to getting us tickets. All I had to do was nothing. LP would wait in line all day and get us a pair of tickets. He also would wander off to the half-price Broadway tickets booth at World Trade Center sometimes, and come home with tickets to see Madonna as a temp or whatever.

Later on, the Public Theater added the option of distributing Shakespeare in the Park tickets downtown at the Public Theater itself. No problem. This was a few blocks from my old apartment. It was especially no problem a little later when Turbo would go wait for the tickets. 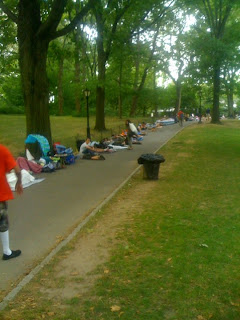 Nowadays, they have replaced the Public Theater line with a virtual ticketing lottery. Which I have used with great success for other productions. But I have entered the virtual ticket lottery ALMOST EVERY DAY for Merchant of Venice with Al Pacino as Shylock, and gotten nothing.

So today, I trekked up to Central Park at the crack of dawn to wait in line.

And was about five hours too late. The last people assured tickets had gotten there at three in the morning.

Theater-goers were sprawled out on camping mats, air mattresses, inflatable beds, and cardboard boxes. They did not look terribly kempt. I suppose if I'd been sleeping outside Central Park all night, then moved into the waiting line at six, I wouldn't look real clean either.

I took my folding chair, muffin, reading materials, and bottle of water and went to the office. I'm still trying the virtual lottery. Every day. But in the end, I'll almost certainly have to settle for having seen the play before and having seen Al Pacino in the movies.

I'm sure LP has seen it though. And I bet he didn't have to wait in line.
Posted by Marie Javins at 10:51 AM