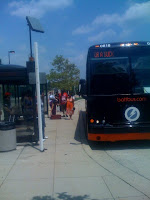 Last Sunday, the Other Marie dropped me off at the Metro, at the end of the line nearest her house in Northern Virginia. When I was a kid, I'd take the bus from Del Ray to Old Town, then transfer to the 11D to get out to Springfield. Now, the Washington DC Metro ends there.

I got across town faster than I expected, so I stopped in Union Station to grab a sandwich. After 20 minutes, I jumped back on the Metro and headed to the Greenbelt Metro.

The day was blisteringly hot. I'd be glad to have the A/C of the BoltBus. But where was it? There was a map on the wall outside the turnstiles. I studied it for a while until I spotted the BoltBus label. Outside and to the right.

Benches were inside a three-sided clear bus shelter. That looked to me like a solar oven, so I sat on the ground by the bike racks, which was open but covered. I ate my sandwich and waited for the bus.

When it showed, we all piled on, eager to head to New York. The bus was almost empty.

Oh. Then it stopped in Baltimore and filled up.

The guy who sat next to me looked to be in his late twenties or early thirties. He carried a German-brand small backpack, a Time Out guide to Prague, a Lonely Planet Czech Republic, and he really liked to fidget. He'd get up. He'd sit down. He'd rustle, move his elbows, and shift his weight. At least he was thin.

The BoltBus headed north. When we hit traffic on the NJ Turnpike, the driver left the Turnpike and headed up 130. In my head, I congratulated his move.

Not so an hour later. I wanted to strangle the man.

We took the Holland Tunnel. What? The Holland Tunnel on a Sunday evening? Is BoltBus insane? The Lincoln has bus lanes. The Holland does not have bus lanes. Why the hell would you cross the Hudson exactly when everyone is coming home from their weekends away and all funneling into the same two lanes to go under the river?

But maybe there is a reason. We sailed through the EZ Pass lane at Exit 14C and barreled right into a massive hour-long queue that ended exactly at the turn-off for my neighborhood.

He got in the line.

We inched forward for an hour. Glumly, I stared at Eighth Street as we eased past it. I became agitated, jumpy, then resigned.

My romance with BoltBus is so over. Next time, I'm going with Greyhound which takes the bus lanes through the Lincoln, or even better, forking over the dough for the Amtrak.
Posted by Marie Javins at 12:30 PM

Maybe megabus runs some routes down that way. I was kicking myself for not going megabus from Pittsburgh a month ago, looked more comfortable and, importantly, cheaper than greyhound.

Ps thanks for the comment on the Cairo picture on facebook. Found your site after looking up who you were. :) Weezie has mentioned your name a few times. I've got to read your travels around the world. Always fun reading fellow travelers stories.