Everything is Gonna Be All Right

"What if I hold the mic here and you guys are in a circle? Ambient noise."

"It's going to sound awful."

I wasn't going to give up. Dammit, I wanted to hear the song that Nabeel had written last night. Alec (our art director) was on guitar, and Nabeel had roped in a friend to sing backup and play second guitar. 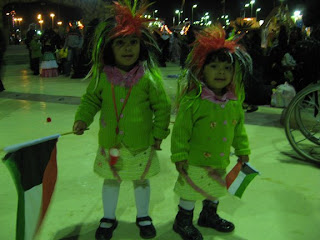 "Okay. Okay... we'll just play it quietly in the front for us and the boss."

"All right." He knew it wouldn't work but they'd all try anyway. They had tried hard to set this up, and more importantly, didn't want to disappoint me.

The guys carried their equipment to the stage and set up.

"Uh-oh." Nabeel was fishing around in his backpack. 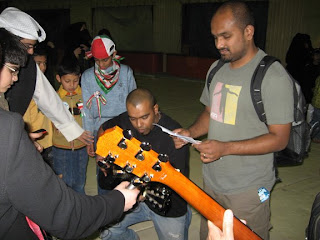 He dug through each pocket. The Kuwait National Band took the stage around us.

Defeated, the guys took their guitars and amps and left the stage. Then the BBC caught up with them. And I got the boss, who brought his wife and kids over.

And Nabeel and Alec and Caesar played.

And it was a beautiful, perfect moment.

Even though a passing kid smacked Caesar on the head halfway through.
Posted by Marie Javins at 8:24 AM