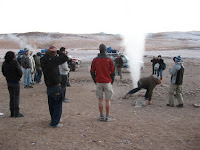 I couldn't hack it. I was weak.

At 4:30 a.m., I dressed in the dark since Hey-There, Paul, and I were in a dual-gender room in the crappy hostel by the Laguna Colorado. "Can I turn the light on now," said Paul after a while.

I went into the two-stall bathroom and undid my belt, but I almost vomited from the smell. There were probably about 25 people staying in the hostel, and 25 people make a helluva dreadful smell when they are all tossing their used toilet paper into a wastebasket in the dark. I fled. I hadn't been drinking much as I was consciously trying to avoid the rank stalls. 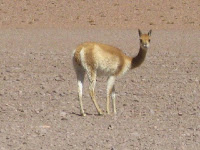 We were all wearing multiple layers of clothes as we piled into the two Land Cruisers in the dark and headed to the Sol de Mañana Geyser Basin.

The crowds at the geysers confused me. We were in the middle of nowhere, Bolivia, at the crack of dawn. What was with all the people?

Quietly, Paul explained it. The cold of the morning made the steam more dramatic. In the afternoon, all the geysers looked like bubbling mud. So all the tour operators arrived at the same time.

Tourists were leaping across steam vents and peering over the edges, ignoring the "Danger" sign. One of our women nearly slipped into one, giggled, and was then surprised to hear it could be dangerous. 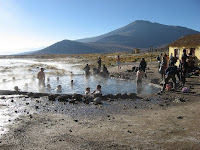 'It's boiling water," muttered someone. It might have been me.

We headed to some thermal springs for clean pit toilets and breakfast. Again with the crowds. We'd all been interested in the springs until we saw the dozens of people crowded into the pool. James the engineer made a joke about "short and curlies" at the bottom of the pool and my thoughts about it being a petri dish of shared illnesses sealed the deal. I wasn't going near the thermal bath, no matter how dirty I felt. 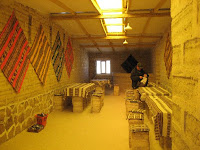 We drove past lovely, rugged panoramas, a volcano, and colorful mountains. In the evening, we stopped at a new hotel, the Hostal Solar Botana in San Juan. The building was made of salt blocks, clean, relatively modern, and best of all, had a hot shower and towels available for 10 bolivianos a go. 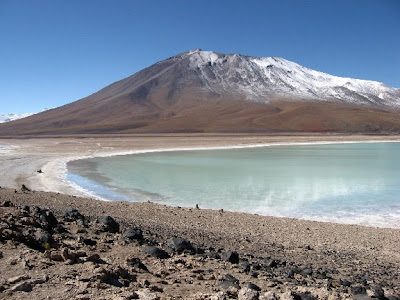 Categories: Bolivia, Travels with Myself