Out of the House 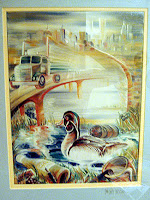 I wasn't there, but the conversation probably went something like this.

Roberta: "I'm worried about Marie. She's working all the time. Can you help me get her out of the house on weekends?"

Michael Kraiger: "You're right. She's even worse than usual. She's a freelancer at heart. This full-time employment thing has broken her completely. I'll do what I can if you do."

The next day, Roberta showed up on my front steps with a bagel. A few days later, Kraiger emailed about some upcoming events. I agreed to go to two of the three. The third is ferrying kayaks across the Hudson on June 24th. I expect to be in Cairo by then.

So last night, I found myself across the street at a wacky performance art talent show. The last performers reminded me of why Yancey doesn't like performance art, but the first several were awesome. A heavy woman did the "can" as opposed to the can-can, because she purportedly could not lift her legs enough to can-can. A bright-eyed innocent Midwesternish girl played the concertina while rapping "I Got It Made" and standing on her head. A woman in a sparkly wig sang "I need a man, I need a man... because I'm afraid of bears." And a man in a tight "wife-beater" T-shirt and suspenders played the ukelele while singing "Material Girl" and sitting in a wheelchair.

Then today, Kraiger dragged me up to the Five Corners Library, where author Steven Hart spoke about his new book, The Last Three Miles: Politics, Murder, and the Construction of America's First Superhighway.

I haven't read the book yet, but the lecture was a fascinating account of the events surrounding the construction of what became then known as "Death Avenue," the Pulaski Skyway. It's a decaying three-mile bridge that rises a hundred feet above JC, ferrying commuters from the world-at-large over our wetlands and chaotic melting pot of a fair city--but to call it a bridge doesn't do it justice. The Pulaski Skyway is simply this: A skyway. That of "This Land Is Your Land" fame. There is no other.

With good reason. The Pulaski Skyway was a colossal mistake. Hart explained how it was built on a railroad model. The center lane was for cars going in either direction to pull over. There were no shoulders. On and off ramps had no merge lanes. There wasn't even such thing as a merge lane yet--remember, this was the first of the big highways. Today, locals drive in the left lane, leaving the right lane open for those poor souls who rev up the ramps only to encounter a stop sign and a long line of cars driven by panicked drivers hoping to go from zero to 60 mph the next time they see a break. Local drivers stuck on the ramp honk impatiently as if to say, "See that three-car-length space between those two SUVs doing 70? You're a wimp! You coulda made that."

And the author mentioned that JC was a city exploited by the railroads. This is true--my old condo was surely meant to be transient housing for railroad workers, the waterfront was owned by competing railroad lines, and today's PATH train was New York's first underground train, even older than the New York City subway lines.

Even today, the long-dormant railroads are still causing us problems. We fight over their right-of-ways. Developers covet the granite walls that held the tracks, planning condos. Residents dream of elevated greenways, bike paths that would connect the Hudson River bike path to the NJ Greenway in the state's interior.

The Pulaski Skyway is dear to my heart. It's so ugly that it's gorgeous. So decrepit that it's perfect. So dangerous that a flutter goes through my chest when I have to choose--the slower truck route, the safe but pricey NJ Turnpike, or the free Pulaski Skyway? How is Henry the Ford feeling? Is he warm? Is there any chance he might overheat if there's a traffic jam up top? Once you're up there in the sky, there's almost no way out.

But it is also means this. It is between Newark Airport and JC. The sight of the Pulaski Skyway means I am home.
Posted by Marie Javins at 10:54 PM

The accompanying photo of the print: My mother found this print somewhere years ago and liked it.

I can't read the artist's signature so I don't know who did it. The print was on my mother's wall for years before I realized what it was. Startled, I said "That's where I live!" "It is? I just felt sorry for the duck."

The image is not entirely accurate. Trucks go below the Skyway, by land, not on it. But still, it captures the area.

Until I read your post it never occurred to me to be cautious about going over the Pulaski skyway (which I must if I take the Holland tunnel home nowadays). Maybe it's because my Hondas are reliable so I don't imagine rolling to a stop perched 20 stories above industrial wreckage.

Now I'll avoid it on my old bike (the one with the tendency to quit running for no apparent reason).

It took me three trips to realize there is no reason, ever, to be in the right lane on the outbound skyway until about 50 feet prior to the exit for the 78.