Back On, But Slowly 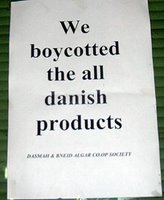 The things you miss when you're off-line for a few days.

I went over to the supermarket, hoping to buy some Legos or some pickled fish or maybe some danishes. But no! Thwarted by the blow-up between some Danish cartoonists and the Muslim world. What's a girl to do?

I would, however, like to point out that there's a fair number of overwrought Christians in the world who did not find the South Park "Santa Claus versus Jesus" episode—in which Santa and Jesus beat the shit out of each other over the true meaning of Christmas—to be the least bit funny. What does that have to do with anything? I'm not totally sure.

I wonder if Saddam Hussein thought it was funny when the South Park movie portrayed him as the gay lover of Satan. I'm digressing again.

Anyway, there's no danishes at my neighborhood supermarket.

Update: What's annoying me is that people are responding by using guns and burning flags, which plays into stereotypes and furthermore makes non-Muslims smug and say "see, I told you so." My opinion on the proper response? If you're offended by a cartoon, draw one yourself. Even better, host a cartoon contest in which all are invited to draw cartoons lampooning anything sacred to Denmark. And better yet? Offer a prize so that even talented people who aren't offended are drawing amazing cartoons to piss off the people who pissed you off. A Thai restaurant here offered a trip to Thailand as a prize for drawing the best elephant and some really incredible elephants have come in, including two from our office. People who have never drawn an elephant in their lives are suddenly churning out amazing elephants, because who doesn't want a trip for two to Phuket? Another thought: Make the prize a free trip to that redneck town in Denmark where this nonsense started. And give the recipient a carton of eggs when they get off the plane. Just my two cents. Or two fils.

P.S. I apologize for offending any non-redneck Danes who my have been swept up in my rash generalization about the redneck town. Of course this can't possibly be the case of all Danes who live in that town, because surely they are all good and charming people who don't go around playing with Legos and eating danishes while stomping on copies of the Koran. It was wrong of me to generalize.
P.P.S. I'm going to start burning copies of all magazines that offend women, as soon as I am out of Kuwait, because Kuwait is not a large enough country for the massive bonfire I'd have to hold.
Posted by Marie Javins at 9:01 PM

Check this out from the editor of the newspaper that started this (illegally copied and pasted here from the BBC site). Clearly a big thinker. What's he saying about mini-skirts and rapes?

"...the paper insists they were right to publish the cartoons.

"We stand by the publication of these 12 cartoons," says Flemming Rose, culture editor of the Jyllands-Posten.

He was the man who commissioned the cartoons, one of which shows the Prophet with a turban on his head covering a ticking bomb.

But knowing what he knows now, would he still commission and print those cartoons?

"That is a hypothetical question," he says. "I would say that I do not regret having commissioned those cartoons and I think asking me that question is like asking a rape victim if she regrets wearing a short skirt Friday night at the discotheque."

Ok, then what do you make of this ?

An Iranian paper is holding a contest for cartoons about the Holocaust, to retaliate against the publication of images of the Prophet Muhammad.

Hamshahri says it wants to test the boundaries of free speech, echoing the reasons European papers gave for publishing the caricatures.

There have been protests about the images across the Muslim world, where they are seen as insulting and racist.

One showed Muhammad, whose image is banned in Islam, as a terrorist bomber.

It also asks for cartoons covering "America and Israel's crimes and plundering".

Uh, that's almost what I meant, but I'm not real comfortable with criticizing America and Israel to get back at Denmark. This isn't going to be pretty.