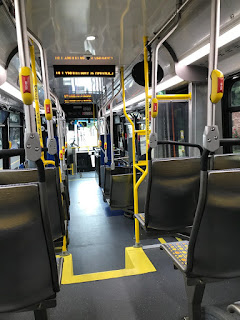 Today was the day I expanded my world beyond the mile surrounding Warner Bros. and my condo.

I figure nothing is going to change in the near future--possibly not for more than a year. So the question is...what is it like out there? If California reopens on 5/15, how do we alter our behavior so our world is safer than it might have been otherwise?

I donned my homemade mask (two layers of quilting cotton and one thin interfacing between), stuffed latex gloves into my bag, and headed out.

I caught the #222 bus north to Pacific and Hollywood Way. All buses are free at the moment, and able-bodied passengers can only enter and exit through the rear door. There were only three passengers on the bus, all keeping their distance. All wore masks. 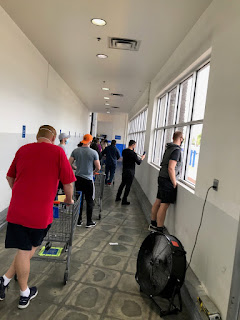 I used my bag to push the button when I wanted the driver to stop, and then walked a mile to Lowe's. I only saw one other person during that walk, a dog walker two blocks away.

Lowe's was...not empty. It wasn't crowded, and everyone had on masks, but the number of shoppers was disconcerting.

I headed on to Target, but the line to get in was kind of nutty, so I walked over to Walmart. There was a queue there too, but Walmarts have actual sewing sections, so I was interested in stopping there. The line went quickly...but apparently so did the fabric. I haven't seen shelves this empty since my last look at the toilet paper section in any major grocery store. I bought the last fat quarter of fabric--it has tacos on it. (Not sure who will want a taco mask, but someone will.)

I left Walmart, passing a tremendous queue of cars all waiting for their curbside pickups. The line to get into the store stretched around the block now.


I caught the #94 bus to downtown Burbank. The bus was not the comfy experience I had on the #222 or was about to have on the #155. This is a bus that goes all the way to DTLA, and had about 12 passengers, mostly laborers and service industry men with varying degrees of mask-wearing, and a homeless man who boarded and then immediately took off his mask and started rambling loudly. 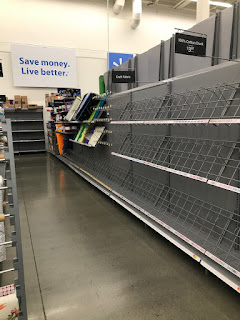 This is the point where I started thinking about that choir, and how they were all social distancing but not in masks, and how I guess it is time I took buying a car seriously, because my dedication to public transit is strong enough that I've gone around the world twice on it and taken it all over LA, but I'm not really willing to die for the wonderful egalitarian stew of mass transit. And once the buses are crowded again, there's no way to control who else sits down close to you.

In downtown Burbank, I switched from the #94 to the #155, which is a mellow line with well-behaved passengers, not many of them, all in their masks. That took me back to Riverside and Hollywood Way, where I picked up a panini and iced latte, and had an itch on my eye that drove me nuts for at least 20 minutes until I got home, dropped everything on my doormat, and scrubbed my hands furiously with soap and water, by which time the itch had vanished. 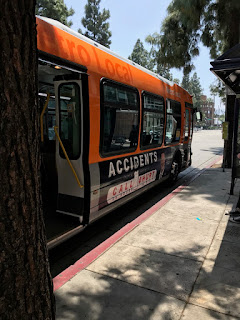 I hand-washed my mask and put my carry-out food into my own dishes, scrubbed my hands again, and here we are.

I was feeling pretty good about the future up until I left Lowe's and went to Walmart. The square mile of Burbank I roam around feels so easy. Vons doesn't always have what I'm looking for, but then it will a few days later. I'm a few blocks from Vons, from CVS, from carry-out restaurants, from the post office, FedEx and UPS Store for printing, and if I want to punish myself, I can go wait in line at Trader Joe's.

But I feel like I just had a glimpse of how other people might be living.
Posted by Marie Javins at 4:42 PM