I took a plane Wednesday night. Crazy? Maybe. My theory, based on reading some reports about air filtration on planes and how many (very few) people are flying, was that flying is pretty safe. While my experience seems to bear out this hypothesis, I have ten days of isolation in Jersey City and then another two weeks on return to LA to find out if I guessed well.

My biggest concern was getting from my apartment to the gate. I waffled for days over which airport to fly out of. Burbank Airport is a ten-minute bus ride away, on the nearly empty 222 bus, while LAX can be anywhere from a half-hour in the dead of night to two hours in traffic. Longer if I take transit and hit all the connections wrong. But flying from LAX means a direct flight to Newark, and flying from Burbank means a connecting flight via SFO or DEN. What’s safer, two flights and waiting in a second airport, or getting to LAX?

I talked it over with Steve B, who had driven to Burbank a few weeks ago and hit zero traffic. Ultimately, I split the difference.

Fly out of LAX, fly back to Burbank.

I obsessively checked the United seat assignments for a few days leading up to my flight. Was it crowded? Where could I sit and be far from others? Should I switch to a day flight instead of a red-eye?

Ultimately, some decisions were taken out of my hands. There are barely any flights at the moment, so once I didn’t commit to the early daytime flights, I had no choice aside from the sole redeye. The scheduled aircraft was suddenly swapped out with a new Dreamliner, and I was suddenly in Premium Plus. (I have Platinum status, now guaranteed to end of 2022 due to pandemic.) I thought I’d get upgraded to a flat bed in Polaris, but that didn’t happen.

As my work day ended, I got a text from the airline. My plane had been delayed. Departure time was no longer 10:55 pm. “Due to cleaning,” my flight would be departing at 12:45 am. GROAN. That’s gonna suck, I thought. (Spoiler: It pretty much did.)

I clicked around for options. There weren’t any aside from flying on Thursday, but I had to work on Thursday. I resigned myself to the overnight.

But what about getting to the airport? Flying so late also made the decision for me. Transit was questionable already at a time when there are fewer trains and buses operating. Was it safer to be in a closed-up car with a Lyft driver for 30-50 minutes, or was it safer to take spacious, empty buses and trains to the airport? Late-night departure meant a Lyft. I pulled on the N95 mask I’d had hanging from a hook since March (prior to that, it lived in a box since I had pulled up the carpet in my condo in 2017). These are super-uncomfortable for the reason they’re so effective. They’re stuffy and hot. The elastic cuts into your cheeks, pulling the mask tight. You feel like you might die just from lack of air. I covered it up with a cloth mask, put on disposable vinyl gloves, and used my phone to schedule a Lyft to Lax.

The N95 and gloves gave me peace of mind as I lifted the trunk of the Lyft car, put in my bag, and then got into the back seat. I thought about tearing off the N95 mask about 20 times during the 30-minute drive, but kept it on the whole ride.

“The airport? I haven’t driven anyone to the airport in two months,” the driver said, an accent so thick he seemed to labor to get the words out under his mask. He played music and an irritating radio announcer kept interrupting and talking over the music in Spanish. It didn’t register for most of the ride that his Google Maps was just giving him directions to LAX, and then I had to laugh at myself. Pay attention.

Traffic was nearly non-existent, and the airport was the least-crowded I’d seen it since 1995. I was at Terminal 7 in record time. 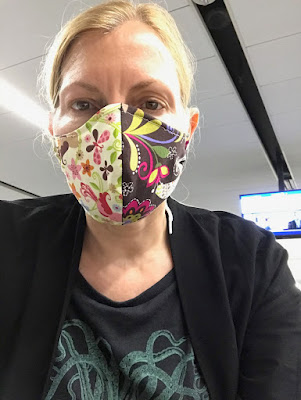 I kept my mask and gloves on as I ventured up to the check-in counter. The automated check-in machines were all closed. Each counter (there were only two) had a large piece of plexiglass acting as a barricade, so the attendant behind it was safe from random passengers with Covid-19. I handed over my newly Real IDed-license and checked in.

So many opportunities for screw-ups. I get my license back. I get my paper boarding pass. Both touched by the counter worker, who I’m sure is perfectly safe, but imagine if this were a normal airport day. So much potential for transmission.

My checked bag gone now, I shouldered my handbag and my laptop bag (two laptops!) and walked to a trashcan to throw away my gloves. Maybe I should have done that before getting my boarding pass, I thought. Maybe I should put on new gloves. I didn't. I probably should have. I seem to lean toward conserving gloves, when the truth is this would be the perfect place to go through them rapidly.

I headed to TSA. Precheck was closed because there were so few passengers, so I just went through the normal line. Which wasn’t a line. There was no line. I saw two other passengers at this point, one getting their ID checked, and another already over at the x-ray machine.

As soon as I got through TSA, I headed to the ladies room. No one else inside, which was good since public bathrooms have been identified as a main means of transmission. I scrubbed and scrubbed—the blow dryers were all gone, but plenty of paper towels were available. Also good, I noted. Hot air dryers can’t be good in the midst of a pandemic.

I sat alone in an empty section of the airport, changed masks from N95 to cloth, then aimlessly scrolled through my phone while awaiting departure. But wait. I was thirsty. Hadn’t thought about drinking water and masks. I filled up my water bottle at a refill stand, went back to the ladies room to scrub my hands again, went back to the bench I’d been on, took off my mask, and gulped water. For good measure, I ate an Rx Bar and some macadamia nuts. I sure wasn’t going to eat any snacks on the plane—which turned out to be good since there were no snacks on offer.

I put my mask back on and headed to the gate just after midnight. People really struggle with instructions. Some were masked. Some had noses exposed. Some had completely taken off their masks. Many passengers, on approach to the counter, would dodge around the plexiglass and take off their masks to better speak to the attendant. One attendant barked orders at a particularly pushy passenger. “Please step back to the other side!”

I boarded last—besides being in the front of the plane, I wanted to be on board for the least-possible time, in case of virus.

I sat on an aisle in Premium Plus, with the nearest passenger being at the window across the aisle. I was reasonably comfortable with the odds on this plane. Masked up, hands washed, I went straight to sleep.

Bonus, turns out wearing a mask means if your mouth drops open while you sleep, no one sees.

The cabin lights came on five hours later as we approached Newark Airport just before 9 am. Newark was similar to LAX had been. Shuttered food stalls, few employees roaming the halls. My bag came off the luggage carousel quickly and I headed to the curb, happy with my N95 and Lyft plan. I stood in a patch of sunlight in perfect, crisp spring weather.

20 minutes later, I unlocked the door to my downstairs apartment in my house. My tenants were with in-laws somewhere south of here, somewhere safe with room for kids to roam. I scrubbed my hands again, checked on the cats (Denise had been on cat duty, and now it’s my turn), and went to ShopRite’s website to look for grocery slots. These are damn near impossible to get, but by some miracle, all of Friday had just opened up. I ordered a hundred dollars worth of groceries (including two mega-containers of Lysol wipes(!), stopped by the coffee shop nearby for a latte which I brought home to dump into my own mug, washed my hands again, and sat down to start my day of working from home. That’s right. They said “work from home.” They just never specified WHICH home.

What’s the verdict? Why did I just do this, fly across the country when I haven’t gone more than two miles from home since early March?

I wanted to see the reality of what we’re dealing with. If the airport felt like the mall in the middle of Dawn of the Dead, I wanted to see it. But mostly, I wanted to see if I could successfully operate within safety parameters. Doctors go to work every day, so I should be able to follow their standards to navigate a mundane task.

And you know what? It was okay. But I don’t think it will be for very long. Right now, no one wants to fly, but once people are braver, and people seem incapable of reliably following rules, seems to me the world of transit will be a shit-show. I’m not sure I’d do this again in three months.
Posted by Marie Javins at 3:16 PM

Categories: JC, Pandemic, Travels with Myself, West for Work