A Look Back at Luxor

Digging around my old photos this morning. 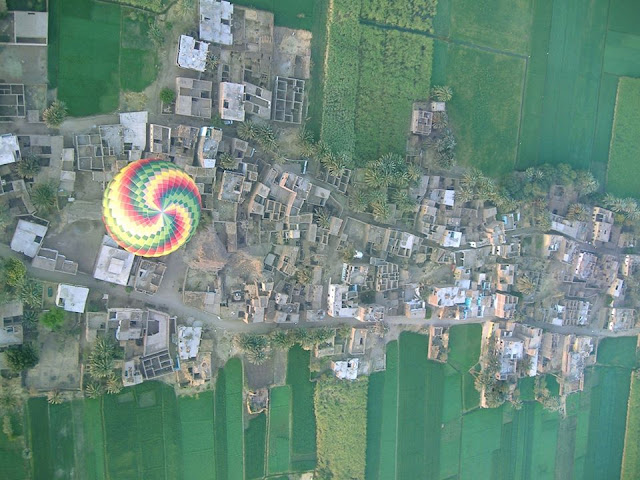 The balloon pilot was passing out certificates of achievement. After all, it isn't every day that one stands passively in a basket while floating through the air above Luxor's West Bank. Surely the early hour alone merits some kind of trophy. Not everyone gets out of bed at 5 while on holiday.


I stepped forward onto the patch of dirt to claim my prize. The wind had been strong, blowing the hot air balloons far beyond their normal landing range. Rural men with donkeys gathered around, momentarily distracted from working their fields. Young boys poked us and said "Hello baksheesh," while the balloon staff tried vainly to shoo them away.

"Ahlan baksheesh," I'd respond. My Arabic hello gave them pause. They'd grin, then a moment later again ask for baksheesh.

"Marie?" I'd claimed my prize, but it wasn't the pilot calling me this time. It was another crew member. He was smiling, beaming at me.

"Train to balloon!" He said, congratulating me with a handshake. Apparently my transition had made an impression in the Sindbad Balloons office. Not everyone hops off the sleeper train from Cairo and onto a hot air balloon.

But what else is there to do at 5 a.m. in Luxor? Sit in the hotel lobby? I'd already been awake. Multitasking would save me the trouble of getting out of bed early tomorrow.

A man with a van had whisked me from the train station to a series of boats, where dozens of tourists waited. We'd crossed the Nile and gone to the launch site. I'd been partnered with Iola, a single woman from Northern Wales, and during the "landing position" drill, I'd gotten rather intimate with her as we were required to crouch down together in a fitted position, with her sitting on my knees.

Gouda, the pilot ("like the cheese"), released plumes of flame into the balloon. It expanded and tried to rise while the ground crew played tug of balloon war with the ropes. Then, they let go and we floated smoothly up into the sunrise.

"The Valley of the Kings is THAT way," whispered Iola. Damn. She was right. We were floating south, towards farms and not towards tombs. Though we could see the temple of Hatshepsut, the female pharaoh who ruled Egypt 3500 years ago. The real successor to the throne of her husband had been a small boy, so she had ruled as regent for 15 years. In modern terms, her temple was the site of a horrendous tourist massacre in the late nineties.

We floated for an hour above the fields and above the temple of Ramses II--Shelley's Ozymandias. You may have heard of this guy. "King of kings." The point of the poem is that he thought he was hot-shit, but in the end, Ramses is just another dead guy with some leftover columns. He's remembered more for a poem than for his military victories. I wonder how old Ramses would feel about that. A wee bit concerned, I'd wager.


Nothing beside remains: round the decay
Of that colossal wreck, boundless and bare,
The lone and level sands stretch far away.

And stretch away they did, to far away mountains of sand. But to the east was a clear demarcation, a brilliant green border. To the east, the Nile gives life to Egypt through flooding and fertile soil. To the west, the sands were so dry that 4,000 year old tombs were still hanging around.

When we finally landed in the far fields, Gouda admitted that the winds had been unusually strong.

"Al hamdullilah," he said as the basket came to a safe halt on a field. Thank God.

Categories: Egypt, Procrastination, Travels with Myself