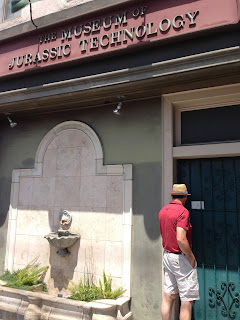 I wanted to go to the Batcave in the Hollywood Hills, but BBF had heard from so many people that he shouldn't miss the Museum of Jurassic Technology. I hadn't been, because it's located on the moon from where I live and work, so on Sunday, we caught the bus south, then west, and it dropped us off in front of the front door.

I was excruciatingly bored within three minutes, plus it was musty inside and my body was asking me if it could freak out. I kept saying no, and hoping BBF would finish reading the dark, tiny exhibits. I must not be the flavor of quirky that most others seems to be, since the vast majority of quirky people love this odd little exhibit space. I can't stress enough how quickly I was done with it, how ready I was to leave, how baffled I was by the appeal. (Which is one of the reasons I prefer to travel alone. How much do you like waiting for others?) I'm glad it's done and over with, simply so next time someone rattles off a list of their favorite spots in LA, I can say "Yes, I've been there, maybe you need more quirk in your life."

We stopped by In N Out Burger for a special taste of Los Angeles. "It's kind of like Shake Shack," I explained, as BBF looked at me somewhat baffled as to why I was asking him to eat fast food. I think we had our fill of both the museum and the sliders. 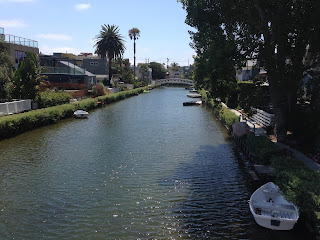 We were almost to the beach anyway, so we caught the bus the rest of the way to Venice. The bus dropped us off near where I lived in 1995, in a part of Venice that is now hip but was then skeevy, like many of my former habitats. We walked along the manmade canals of Venice, strolled the beach (which is essentially unchanged to my eyes), and caught the bus east for the long journey home.

Topping the day off was our trip to the Egyptian, which involved no buses as it's a ten-minute walk from my apartment. Such a relief to sit in a dark room watching Thunderbolt and Lightfoot instead of dragging ourselves all over town.

For the rest of BBF's visit, I went to work during the day, and he'd pick out something for the evening, like dinner and the new Star Trek movie (thank goodness we saw a good movie on Sunday night—kinda took the sting off). On Wednesday morning, he trundled off to the Flyaway bus stop in Hollywood, and I headed north to my job, as I always do on weekdays, and sometimes on weekends. 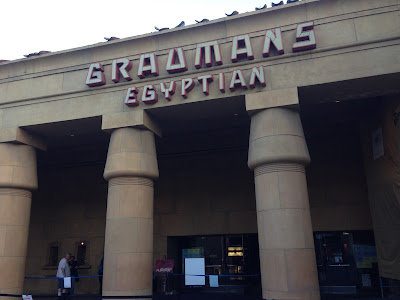 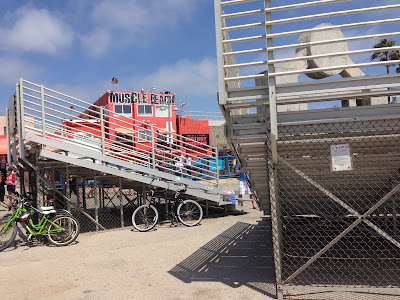