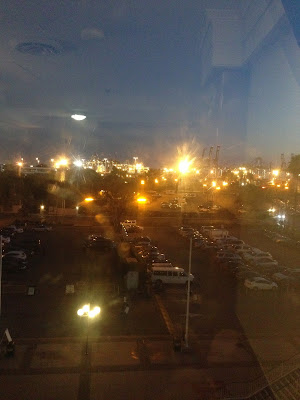 When I'd initially gone to the Catalina Express site to purchase two ferry tickets from Long Beach to Catalina, there had been plenty of tickets. Naturally, I did nothing.

By the time I got around to checking again, all the tickets had been purchased except for ones at inconvenient times.

Which is how BBF and I ended up dragging ourselves out of the Queen Mary at five on a Saturday morning.

I called a Lyft while BBF was in the shower, and after circling around Terminal Island for a bit, we ended up at the ferry.

I'd sprung for Business Class, it being six when we departed. This isn't really terribly different from downstairs, but you get a drink (because everyone wants a drink at six in the morning?) and some chalky carbs.

On the bright side, we were in Catalina by quarter past seven, and we were in Avalon's breakfast hotspot before the rush.

Which, admittedly, if I'd known there was going to be a rush, we'd have gone to a different breakfast spot. The entire ferry clientele appeared to descend on Jack's Country Kitchen about ten minutes after we ordered.

We ate breakfast slowly, mostly because that was the only speed we were being served at, and planned our upcoming day. 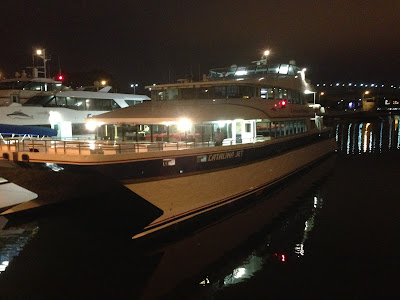