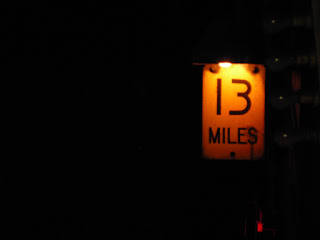 I'd been scheduled to go on a NYC Transit Museum tour of the Coney Island yards at the end of 2012. That's where they overhaul and fix subway cars, store some, maintain others. The yards can store 1,800 subway cars, and I remember passing it well back in 1986, when I lived in Sheepshead Bay and worked on Staten Island for while. I'd walk to the D train, take it out to Coney Island, catch the N train to where I could transfer at Brooklyn's 59th Street, and end up at a stop on the R train where I'd catch a bus over the bridge to Staten Island.

I wasn't real happy about Coney Island in those days. It was just another stop along an extended route to my internship at the Staten Island Advance newspaper.

I can appreciate industrial areas more now, particularly when they lead up to boardwalks and amusement parks. So I was pretty excited about the Coney Island yards tour.

But Hurricane Sandy battered Coney Island and put an end to the tour. Instead of a tour, I got a voucher to use for a different Transit Museum tour in the future. 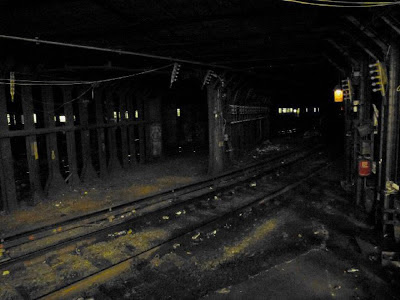 I forgot to check on the first day the tickets went on sale for this season's events at the beginning of January. By the time I got online two hours later, the best stuff was sold out. I'd been keen to go on a private tour of Grand Central, since it's GCT's centennial this year. But I blew it, so instead I signed up for a talk on when the city made the IRT and BRT (you may recognize this by its later name if you're a sandwich fan—the BMT) become one transit system.

I wasn't sure what to expect, but I headed up to Times Square at the appointed time and met on the Shuttle platform.

We were all given earpieces and radios so we could hear the lecture. We took a good long look at where the original system had been—once upon a time it had come up from City Hall to Grand Central, the hooked over to Times Square before heading up the West Side. "Like the letter h," explained our guide. 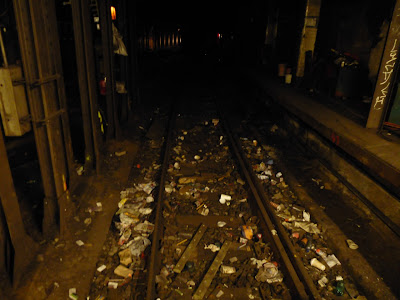 We were standing at the point where the line on the left of the h met the curve. All that was left of the arc was the old S train (Shuttle), which trundles back and forth, back and forth, from Times Square to Grand Central. Two years after my Staten Island internship, after swearing I'd never come back to this dirty, crazy city (famous last words, eh?), I was up in Riverdale, commuting by bus to the 1 train, then shooting down the West Side to the S to the 6. After a few weeks, I grasped to switch to the N/R instead and walk from Broadway to Park Avenue South. But initially, I'd take this weird S train, and wonder why this rickety beast existed when it made so little sense and served so little purpose.

We headed downtown on the 1 train after this, and since all the trains were running on weird weekend schedules, none of the maps reflected reality. We went deep into Brooklyn, learning as we went, and finally, late in the afternoon at Atlantic Avenue, I took my leave and headed back into Manhattan to stop in my office for a few hours.

As I rode, I realized something.

I'd just ridden the subway for fun.

Of course, the D doesn't run from Sheepshead Bay to Coney Island any more (having been replaced by the Q there) which may make your first story a bit confusing to people who weren't in NYC before 2001. Also, those both sound like hellish commutes.

A while back I made these maps of the evolution of the subway system (and the elevated lines that predated it) every five years from 1875 to present, which seem vaguely relevant. The pre-dual-contracts configuration of the "original subway" you discuss is shown in green on the 1905-1915 maps.

The Q train completely confuses me. I feel like it didn't exist, and then one day it did. But I looked it up, and it did exist. It seems to have evolved quite a bit over the years...your maps help me understand that I didn't imagine this.

I was staying (I think--this is a very long time ago) at Avenue U and 21st Street, and I remember quite a walk to the train, which I guess must have been the Avenue U stop, as that would have taken me to Coney Island to where I could switch to the N to 36th to the R to Bay Ridge.

The first day I went to Staten Island, I went to Manhattan and took the ferry over to the SIRT. That was quite a shock given the time involved and also Brooklyn was just...man...and that along with my later experiences with friends living in 1988 Greenpoint taught a long-term dislike of Brooklyn, which given what the borough has evolved into is utterly without merit today. Kind of nutty. The city has transformed so much since 1986.