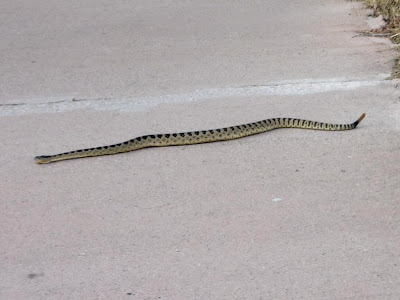 I got off the Zion shuttle bus at the Canyon Junction stop and walked along the Pa'rus Trail, on my way to the third bridge to catch the sunset.

The lighting was dramatic and perfect. The photo skills I'd learned back in Page's slot canyons helped me get a good shot, and then I happily walked the last mile or so back to the Visitor Center.

A couple and their kid were hiking in front of me, and I stopped because they'd stopped.

"Rattlesnake," said the dad. The mom peered over the side of the walk at a rattler. He was long and rattling away, telling us to back off. I hadn't heard that since I was a little kid in the country in Virginia, on vacation with my family.

"Don't get too close," I said. No one was going anywhere near him, but I couldn't help issuing a warning.


The snake didn't want to come out for his close-up, so the family walked on. I hesitated a minute...he was awfully close to the trail.

And then he slithered out, at full size, stretching across the path. He stopped right in the middle, which was probably warm.

I waited. The snake had taken up residence right around a bend, after the third bridge on the trail. Anyone who came around the bend wouldn't have time to stop before they were on top of the snake. 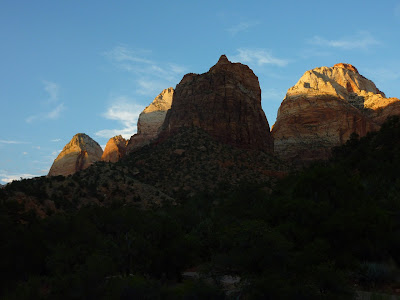 "Stop," I yelled, waving at them and holding my hand up.

They stopped short. The snake seized up into a curl, hissing and rattling.

He didn't like bicycles nearly running him over. He slithered away quickly into the undergrowth, with no one hurt, including the snake.

I grinned at the cyclists and finished my walk.

As I passed the campground, I heard "Hey!"

It was the German brothers, my next-door neighbors from the Page campground.

"No sausages this time?" They had take-out food, and had offered me sausages back in Page.

"No, we're trying Thai food this time. It's pretty good."

I decided to try it too, and so I stopped in town on my way back to my campsite. My review was less charitable, but it was hard to put a damper on my mood after a great day of seeing Bryce, Zion, and a rattlesnake.