Should Have Gone to the Beach 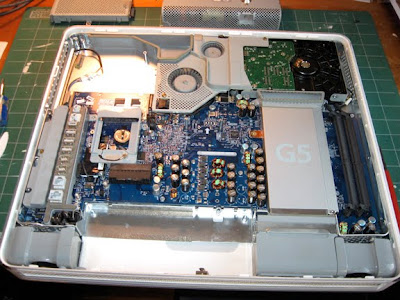 See this gorgeous hunka crap? It was a computer about an hour ago.

I think of it as "Emily's G5," because the last person to use it was Emily, our intern at work a few years ago. The rule was she could never turn it off, because it wouldn't come back on. Or would, but not when you wanted it to. Maybe it would come on at midnight a week after you tried to turn it on, or maybe it would purr and turn on instantly. It was better to just put it to sleep and never turn it off.

I thought I'd bring it home and play Dr. Frankenstein with the iMac G5. How hard can it be? Which is also what I said before I ended up having to race around to find the water shut-off the time I decided to fix the tub spout, or the time I thought I'd just install that vanity by myself. All ended well in those cases, but I don't have such high hopes here.

The G5 came apart without incident. I followed these instructions.

"Like brain surgery? Use this guide to replace your logic board."

That went smoothly enough, though I don't own a "spudger" and thought I could use a manicure stick instead. That didn't go so well but an ink pen and a small flat head screwdriver did the job.

So now I have this logic board, and looking at it, I can see clearly that some of the capacitors are busted, leaking goo off their tops. This is what I expected, since that's what happened to most all this era of G5 iMacs.

I am not going to try soldering on new capacitors. We learned in solar school that I am a sucky-solderer. I'm going to send it to a guy instead, a guy who makes his living soldering capacitors onto logic boards. I'm not so sure it will work, since the power supply might have been damaged along the way, and there's at least a 50/50 chance I will screw something up when I try to put this thing back together, but I'm willing to give it a shot for sixty bucks.

Let's hope this ends better than the Tunnel of Fudge Bundt cake mix. The scratch cakes were so much better. 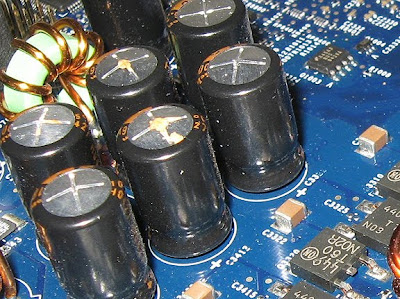 The G5 was such a great computer.
I hope it doesn't die, because that was the LAST one that was fun to take apart and swap stuff about.