Looking for a Sunny Day

I rolled out of bed late yesterday after a late-ish night out with some of my comic book-related pals, then had to race around to get out of the house on time. I had a class to get to at 2:30 in Brooklyn.

The commute turned out to be incredibly short and easy, as the location is right by the L train, which is a straight shot from here. PATH four stops to 14th, L train from there five stops to Lorimer.

The class, however, was not so easy. But it was a lot of fun.

A group of ten of us took little solar panel squares, glue-gunned them together into arrays, then soldered in connections using wires and soldering irons. We used breadboards, jump connectors, diodes, and various metal gizmos to rig up circuits using the panels, which charge up rechargeable batteries.

In the end, we stuck the three-part gizmos (solar array, circuit, batteries) into take-out food containers.

And the sun went down right as we finished. (And I raced back to JC to catch an 8:40 screening of Saturday Night Fever at the 1929 movie palace.)

I'm charging the batteries today, hoping that the LED lights turn on once the sun has done its job. But it's kinda gray and rainy out... 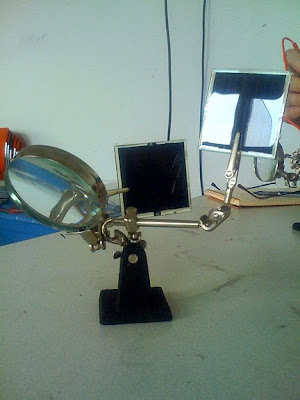 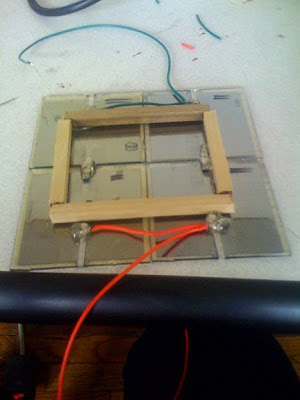 The only word I recognized in that entire description was "gizmo." Hope the cloudy days clear up soon so you can test it.