Goodness... I am starting to repeat my own adventures.

Okay, not starting. Long-time readers went across Southeast Asia two years running with me, then tolerated Cape Town to Kampala in both 2001 and 2005.

Last year, in June of 2008, I went canoeing in the Meadowlands. Helen, Roberta, Tom, and I went, and it was a fascinating way to spend the morning...

...before I boarded a plane to Vegas to go on a Grand Canyon rafting-camping trip.

The Meadowlands were a bit obscured by the week that followed.

I went canoeing again this year, on Saturday with Kraiger and his kid. I tried reclining in the middle of the canoe but the kid only lasted about 10 minutes before she wanted to swap places with me.

Turns out several people are fascinated by this excursion. The Meadowlands have a reputation of being filthy and polluted, of stinking and being an illegal dumping ground.

New Jersey isn't just home to crowds, the NJ Turnpike, and stinky oil refineries. It also has Pinelands, forests, beaches, and a piece of the Appalachian Trail. NJ suffers from an image problem. Why would the Meadowlands be any different than the rest of the state?

Since 1969, the Meadowlands Commission has been trying to control illegal dumping, preserve the wetlands, and restore the damaged parts. The area I was canoeing in, Mill Creek Marsh, was restored starting in 1996. I'm not sure when canoe tours started but there is a public launch. If you have your own canoe or kayak, you could row around for free.

I don't have a canoe, so I have to wait for the public summer tours. You can book them (or pontoon tours) here.*

We paid $15 a person, which included canoe rental, life vest, paddles, and a guide. We were rained out of our first-choice date in June.

We drove to the canoe launch in Secaucus, which is past Home Depot and on a dead-end road to the east of the Secaucus center. Kraiger's kid was fascinated by a dead fiddler crab on the launch, and then by a wild bunny. She followed the bunny until larger people came along and loudly scared the bunny away.

Rampant reeds called phragmites grow wild among the wetlands. There are channels through the phragmites, and we paddled through them, viewing egrets and herons.

We did not spot any elusive muskrats. We did spot a wild soccer ball and what appeared to be a redneck house, blasting loud music across a yard filled with a dirtbike, quad-bike, and assorted BBQ setups.

The sun was strong and after an hour of paddling, we were just getting tired when we headed back to the launch. Henry the Ford Taurus was waiting for us, with a container of fresh watermelon. 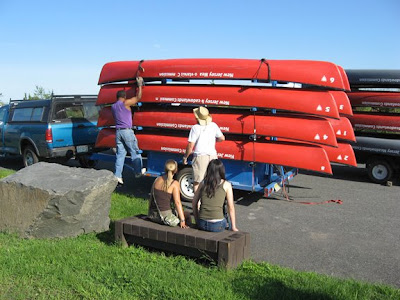 *If you can't get on the public tours, try renting a canoe or kayak here.
Posted by Marie Javins at 8:08 AM