I had to get Henry the Ford Taurus his yearly car inspection. Which happens in Virginia since my sister actually owns him.

I know, I know... he's my car. But when I left town for an extended period of time once, I gave my car to my sister. I keep meaning to legally take him back, but I'm kind of superstitious when it comes to my car. I secretly believe that he'll break as soon as I pay all the fees to make him my own again.

Last year, I whizzed down and back in a day, straggling into town on fumes and running out of gas just past the Turnpike gate. This time, I left work early on Thursday, hitting the Turnpike in the rain.

Cleared out of town so I clear my head.

My iPod chose Kathleen Edwards on "Random," playing it through the car stereo as I praised the E-Z Pass and whipped off of the Turnpike and onto the Garden State Parkway. I'd decided to take a look at Wildwood on the way.

I was feeling paranoid about driving. This must be because I drive so infrequently. Or maybe it's that tiny little voice in my head that keeps reminding me of the fortune teller in Bangkok. Two years in a row—I'd gone back to him to see if he said the same things twice and he had, based on some complex equations he worked out on paper—the fortune teller had warned me that at age 43, I'd be in a horrible car accident and would be okay, but recovery would take a long time. I laughed at myself for thinking about this.

And then thought, maybe he was off. Maybe the car accident was metaphorical, and was actually the unfortunate events in late 2005, blogged with obscurity right here. Recovery sure had taken a long time. Sitting still and letting myself hit bottom while trying to regain the life I'd gleefully abandoned in 2000 in favor of the open road had not been the hardest single thing I'd ever done, but it had been the most relentlessly unrewarding.

The rain let up as Lucinda Williams sang Gram Parsons. Then the evening cleared for a perfect trip to Wildwood. I parked and took the bus tour of the "Doo-Wop" 1950s motels.

Afterwards, I drove up the road to Vineland to stay the night. Henry and I had driven these routes before once, in 2004 when researching Best in Tent Camping: New Jersey. But it was dark now and I fretted. I hate driving unfamiliar rural roads at night in deer country.

I checked into a tired Days Inn. The bed jumped when the person in the next room rolled over. Ewww, I thought. The whole room was eww. A homeless woman slept in the outdoor stairwell, her shoes on her lap.

I'd been to over 70 countries, most of them alone, sparring with touts and con artists while dragging around a 40-pound backpack. Why was I bothered by a grimy Days Inn and a relatively short drive in my own (sort of) car?

I must be getting soft. How can enduring my "normal" life until it was indeed normal make me weak and paranoid? I charged the iPod overnight for tomorrow's trip.

And you and me are in way over our heads with this one.

On Friday morning—suspecting that Liz Phair was onto something—I drove to Virginia, got Henry's new inspection sticker, visited Home Depot with my mother, then drove as far north as Delaware before collapsing into another grimy hotel, this time a Howard Johnson's.

I checked out their free breakfast on Saturday morning. Froot Loops and corn flakes. I got back in my car and picked up an Egg McMuffin at a drive-through.

I'd gotten started too late and the heat of the day was already bearing down as Henry and I, feeling braver now, tore up I-95. I was singing along to the iPod, spacing out a bit instead of gripping the steering wheel. Trucks no longer terrified me. I'd just needed to get used to being behind the wheel again, here in Henry the Ford, who had driven 10,000 miles in 2002, shuttling Turbo and me from L.A. to mid-America to Virginia to New York. Turbo had even driven him on the left a few times before I'd calmly said "You're driving Australian again." 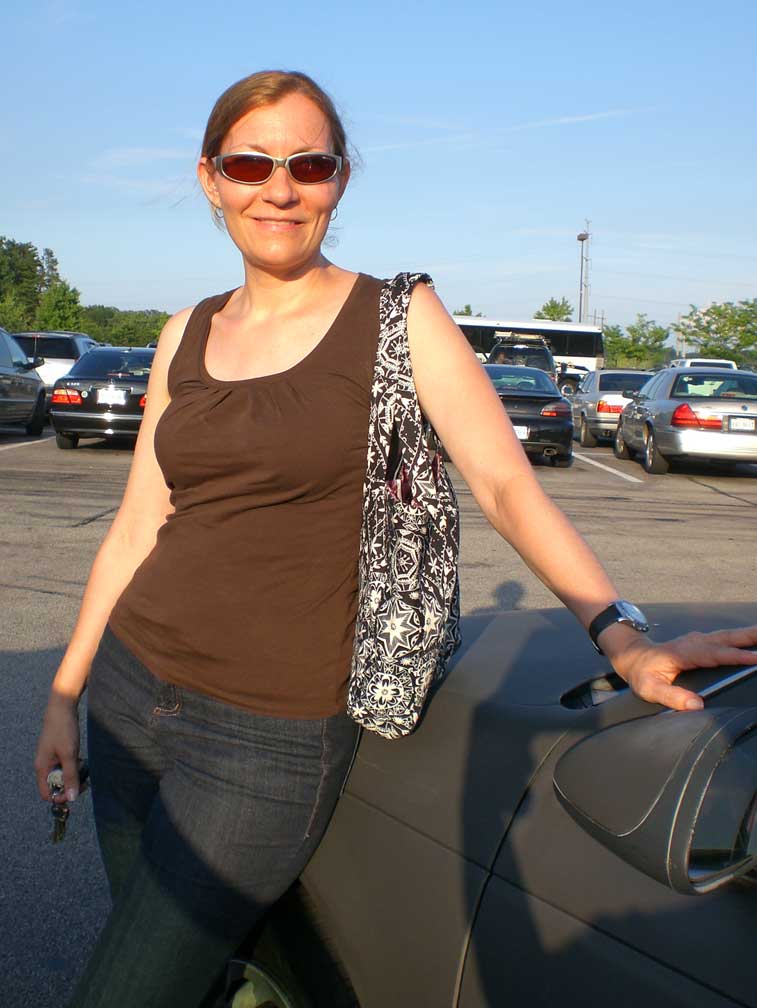 The Delaware Memorial Bridge shimmered into view, slightly blurry through the haze. Just over the bridge was New Jersey.

What are you doing in a place like this, girl? Anyone could see you're the queen of the world.

Blaring the Bottle Rockets with the windows down, I flipped the gear shifter into overdrive and revved Henry a bit, to go faster up the ramp to the bridge.