Yesterday, I left my mother's at 10, ran by the post office, drove to Alexandria where I bought some last-minute things at REI (which I already own but stupidly did not look at my packing list for Bolivia until I was underway), got a manicure, ran by Target, and dropped the rental car off at National Airport with only six minutes to spare.

I got to hang around the airport for hours. What fun.

Then I was off to Miami, but because we had NO PILOT, our flight was delayed. I barely made my Peru connection in Miami.

I picked at my plane food and slept poorly, as one does on airplanes.

This morning, my plane arrived an hour late. But the hotel taxi driver waited. In Spanish too screwy to qualify as broken, I convinced him to take my bag to the hotel and drop me off at the bus station.

Which, of course, was sold out of seats on the 7:30 bus to Ica. So I jumped into another taxi and rushed over to Soyuz bus terminal. Their buses are not as nice as the Cruz del Sur buses I'd been aiming for, but they leave every 8 minutes.

I got on the 7:34 a.m. bus, wished for coffee or breakfast, but knew it was only a day of inconvenience.

Four-and-a-half hours later, I tried to stop the bus as we passed the hotel that holds the office of AeroCondor, but there was a toddler plopped down in the aisle, so I continued on to Ica like the other passengers. There I got a taxi to the Hotel Las Dunas, where I wheedled for ages until a single seat suddenly became available.

"I e-mailed ahead! Three separate people responded that I had a booking."

"That happens all the time."

It was another 4.5 hours back to Lima afterwards, which didn't include a 45 minutes wait to buy a ticket or the fact that all I got eat all day was a Popsicle, and my ankles were swollen while my brain was numb.

But I got to see the Nazca Lines, something I never got around to before. 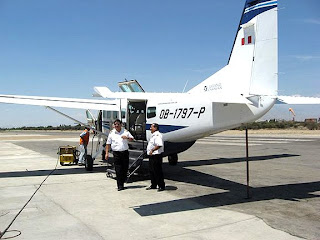 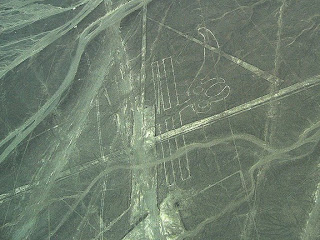 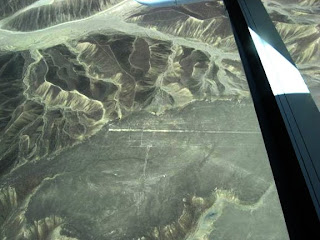 Categories: Peru, Travels with Myself

Holy canoli. Why don't we have a camera crew following you everywhere you go?

The last time I had a cameraman along, he got grumpy when I made him do something like my day yesterday. And he seemed to think it was his holiday too. The nerve!