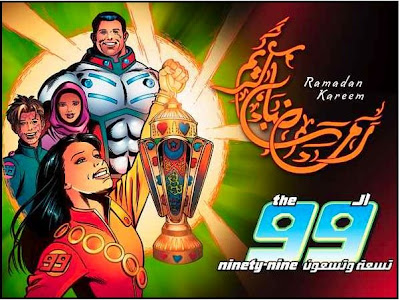 Great work by the artists. Unfortunately, when I look at it, I see that someone screwed something up while inputting it into the mass e-mailing software. It appears that it was made into too small a web file—or maybe someone made it low res and then tried to make it high res again—and this damaged the appearance. But not many people will notice that. The colorist sure will.

Here are the steps involved in producing comic book art.

First there are pencils, a kind of blueprint. June Brigman drew this. 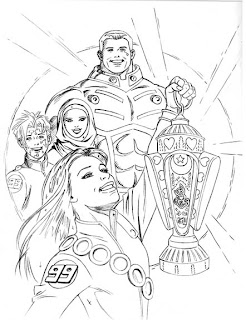 Then the pencils are inked. Roy Richardson works as a team with June, and he inks her work almost all the time.

Then Monica Kubina colored the image. She colored the yellow background, but I put in a mask so that the designer could change it to whatever color he needed for his card. The masked out part shows here as black on the far left, and I dropped a blue on a layer to show the designer how he could change the colors.

And that's it! That's how a comic is made. Except for the writing, scripting, lettering, compositing, marketing, and all that sort of stuff.

Did anyone notice that Noora is holding my personal Ramadan lantern?
Posted by Marie Javins at 9:59 AM

Great post - I enjoy seeing this process. So they still start out as actual drawings on paper? Amazing. Photoshop masks and adjustment layers are the best thing for those of us that like to change our minds constantly.