The Successful Board Meeting 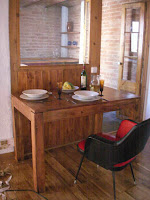 Baffled, I blinked amiably at the landlord of the flat I had rented in Barcelona. He was a funny and sweet guy but I wasn't sure how to respond to his admission.

But when he'd said it for the fifth time in 10 minutes, I realized it was a standard line of his, that I was allowed to chuckle.

"My trousers are falling down." He tugged at his jeans, which were slipping off of his hips as the gold belt around their waist was not actually looped through them, but just sitting on top. "On the street that is a good thing. On the stairs, not so good."

I agreed that walking down seven flights of stairs while losing one's pants could be dangerous. He added, as an afterthought:

We'd inadvertently become co-conspirators a minute earlier. It was the day before I was flying home, and new tourists had showed up to—confusingly—rent the flat I occupied. But the owner was nowhere to be found. He was off being a slut. After all, it was mid-afternoon on Sunday. That's just late Saturday night for such a slut.

"We've rented a flat from him. Do you know where he is?"

I suggested the new tourists go for coffee after locking their bags in my place—actually the landlord's place. I'd rented his newly renovated studio via Craigslist. Normally, I rent a place from Rentalona and I've never had a problem with them. But I needed internet access. My job is not a 24-hour one, but it's at least an 16-hour-a-day job.

The newly renovated flat had not been quite finished. "I'm afraid I've been out too much partying with my friends and did not finish."

At least he was honest in addition to being such a slut.

Then the owner waltzed up the (many) stairs.

He spotted the tourists, then froze as the gears in his head turned almost visibly. He gaily introduced himself and came up close to shake hands. He reeked of alcohol and... sweat.

He didn't say it to the new people but in my head I added, "I was such a slut."

He then went about moving me into the now-finished renovated studio and installing the new tourists in his own flat. He and I retired to the studio, where he showed me a website called gaydar. co.uk, and searched for Egyptian gay men.

"That one is delicious!"

"Where will you sleep tonight?" I asked. He was a funny guy and all but I'd paid for my own flat, not for a flat with a roommate.

He then proceeded to ask me a lot of racy questions about the sexual practices of Egyptian Muslims, which I cannot repeat here as this is a public blog. Sadly, I do not know the answers to most of his questions. I do know that it is not uncommon for women to receive the "two-stitches" operation. That is, they can revirginize prior to marriage.

He was cleaning up the studio for me, still declaring his sluttiness and board meeting success when I took my leave. I went to the coffee shop to waste time while he finished up. I'd leave in the morning and wasn't sad to go. It was highly entertaining but I'd spent enough time in Barcelona. I'd bought new clothes and my Tin-Tin caganer. I was done. I may be so done this time that I don't need to go back.

But if I do go back, next time I think I'll rent from Rentalona.
Posted by Marie Javins at 8:16 AM

'The Slut Landlord.' The person you depend upon most for safety and security is a drunken, irresponsible, flighty, flaky... slut.

Sounds like fodder for a Saturday Night Live skit. You should pitch it to NBC.