Better for Time-Telling than Tooth-Brushing 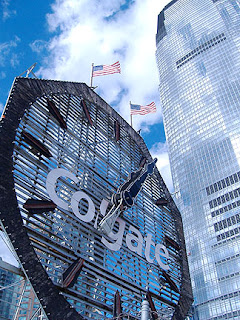 In 1820, Colgate opened a manufacturing operation in Jersey City, and 27 years later, its head office moved over from downtown Manhattan.

Colgate stayed here in JC until the late eighties. By then, the company had expanded to other factories and offices, and the JC factory was closed since it could not be effectively modernized.

The old building was razed in the 80s, during that last local boom. Such a shame--it had a classic industrial look and some visionary should have renovated it into condos. But Colgate and local officials faced a dilemma: What are we gonna do with the octagonal, 50-foot Colgate clock, one of the largest clocks in the world?

The octagon shape was intended to support Octagon Soap, a Colgate product long since lost to time. Mayor Hague turned on the current clock in 1924, which replaced a smaller one from 1908. The original clock, according to an article in last week's paper, moved to Indiana.

Today, the orphaned 50-foot clock sits on an empty lot by the Morris Canal, in the shadow of the Goldman Sachs office building. It's unlikely to remain there as that empty waterfront lot is prime real estate (though it's supposed to become a park). But the Colgate clock is a vital symbol of JC's industrial past. Colgate is long-gone, but there is no way this clock is leaving town. It will just be moved again. 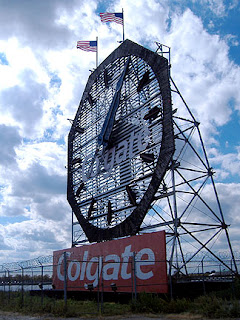 what an awesome piece of history to be shuffled around like that. seems crazy to me that they can't find a permanent home for it.