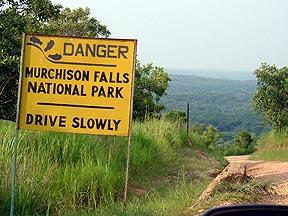 This morning, the generator kicked in at the construction site across Hamilton Park.

Perfectly normal, this sound of a generator at the crack of dawn.

For Murchison Falls, that is. For Paraa, the small village I spent the summer in back when I was optimistic and in love.

Except I wasn't, because that's not really someone I am capable of being. I was close though. It was unequal (his territory) and awkward (his friends), but still romantic.

It was June of 2005 when I went over to Uganda. The man I'd met in the final chapter of Stalking the Wild Dik-Dik had an international development job there, and I wanted to be in Africa to write a book about Africa, so off we went to Uganda.

The ending of the story was one of those heroically horrific romance-gone-terribly-wrong stories, but the last few months were spectacular. Events that left me needy and in the hospital were to his terrified mind the catalyst for a breakup, or rather a runner, as it produced a vanishing act better than any magician could conjure up.

But before that, we laughed along the Nile. He slept through the heat of the day while I photographed warthogs on the carport. The hippo trundled by our bed nightly, sounding like a less-benign Snuffleupagus.

That's when I started this blog. I called it "No Hurry in Africa" then. And now I'm looking at home, feeling spectacularly average against a backdrop of overachieving New Yorkers. Now is the time for routine, for joining in the Habitrail of employment, eating, and sleeping. 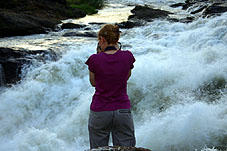 The generator this morning caught my attention. The familiarity of the sound transported me instantly back to Uganda, jump-started me into nostalgia. Where is he now? Is he a refugee perhaps helping refugees, a kindred soul with luckier circumstances? Did the master's degree work out? Who does he love? Or is he like me, permanently distant, walls of solitude earned over years of self-sufficiency and independence? Did he learn from abandoning me and is he a better person now, someone else reaping the rewards of the lessons I never intended to teach?

I love how a sound or a smell can evoke memories like that, taking us back somewhere in an unexpected way. And remember that it's most certainly HIS loss. You deserve SO much better!