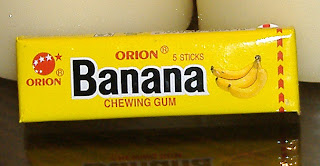 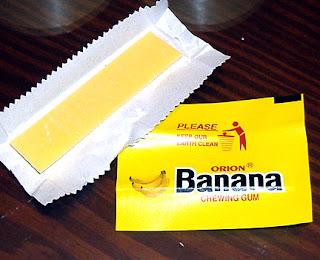 Banana gum! Eww, sounds gross, right? So gross that I bought it, which means the cashier had to go to a lot of trouble to get the right small change. (Everyone in Egypt seems to be lacking in change, but at least in the supermarket they don't shortchange you like in Coffee Bean & Tea Leaf, though my pal D chooses to believe they just can't count.)

I thought it would be overpowering, too banana-y. But it had only a pleasant banana taste, much nicer than the overbearing yellow color of the gum stick. The ABC (already-been-chewed) look was still yellow, so I guess the dye stayed in the gum instead of going into my stomach. That's a plus. The consistency was a bit waxy.

I couldn't figure out where the gum was made. It had English, Arabic, and Cyrillic writing on the side of the package. My friend google tells me it's from Korea.
Posted by Marie Javins at 4:09 AM

I initially misread the label as 'Onion Banana,' which would have been a doubly delicious treat!

I wish..! Though I might not have consumed the entire pack at one go were that the case.