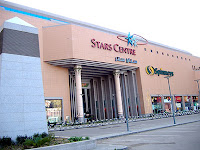 Last night, I went to an upscale mall in the suburbs, had Asian cuisine in a food court, checked out the times of Hollywood's latest blockbusters at the cinema multiplex, browsed through the book section at Virgin Megastore, bought a pound of Starbucks Kenyan roast ground for a french press, and took a modern, climate-controlled taxi home.

Which all sounds perfectly normal (except that I would never buy bitter Starbucks coffee elsewhere but here I had extenuating circumstances*). Except I'm in Cairo, so it wasn't normal at all.

The mall had a sparkling pyramid on top. And getting to the mall in question involved taking the metro from work in Dokki to Heliopolis, then sitting in traffic for ages in an old Fiat taxi. Then to get into the mall, I had to go through a metal detector and put my bag through the x-ray machine. (I had to do this once before, in a mall in the Israeli city of Eilat.)

The menu at the Asian restaurant was all over the map. I ordered a "bento box" off a menu that featured sushi, Thai red curry, chicken tikka, Korean barbecue, and sweet and sour chicken. And then I got the idea to go to the nearby Starbucks (the only one in Cairo) to acquire coffee for my french press, not realizing that it would involve complex street-crossing acrobatics. It actually occurred to me that I might never get across the streeet, so full of cars was it, but finally a group of locals braved the lanes and I walked alongside them. In retrospect, it seems a bit stupid to risk my life for coffee that I don't even like, but I didn't realize traffic was so awful until I was in the middle of it.

I bored of the mall and shopping fun pretty quickly. I know it's there if I have something to buy. Then it was time to go home.

Uh, how do I do that? And where in the hell was I?

The map I'd swiped from my first hotel placed me on the border of Nasr City and Heliopolis. But I had no idea how far that was from Zamalek. It wasn't too close. That's all I knew. How much would I pay the taxi? Obviously, leaving it up to the driver was a doomed strategy.

Had I known what I was doing, I'd have comfortably gone to the cinema and figured out how to get home later. But I was worried.

How about a meter taxi? My colleagues from the Kuwait office won't even take a regular taxi here--only a new, safe metered taxi. I usually laugh at them, but of the three of us, I'm the only one who battles it out with taxi drivers on a near-daily basis. They pay more but travel in clean and safe conditions. (The irony is that I'm the American—supposedly the spoiled one—but I'm the most likely to embrace squalid value.)

I tentatively approached the taxi rank. At home, we'd call these radio cars. The kind you call on the telephone. The regular rickety taxis weren't allowed inside mall grounds and they all honked and clogged up traffic just beyond the parking lot boundary.

The driver of the fancy taxi turned the meter on, wound the windows up, didn't smoke, and PUT ON HIS SEAT BELT.

He couldn't get out of the parking lot due to the exit being blocked by all the cheap taxis. Rather than sit there and honk, he turned the car off, got out and asked them to move. They did!

There was still awful traffic all the way to Zamalek, and at one point we were in a wedding procession of cars all honking their horns in unison. The ride took forever, but it wasn't too bad since I was comfortable and I had no dread about the ride ending with an argument.

How long was it? I don't know. Probably just over half an hour as we zipped along the elevated highway above downtown Cairo. The grand total? 21 pounds. $3.68. And no hassle.

Maybe my colleagues from the Kuwait office are onto something.

*All I could find was espresso, Turkish coffee, or Nescafe, nothing for french press, except at Coffee Bean & Tea Leaf, where a pound was $16.
Posted by Marie Javins at 10:27 AM

And in case anyone is curious, the Starbucks in Cairo offers FREE wi-fi. (They'd have to, really, since all the other cafes and coffee shops do.) It's a clean and large space, with enthusiastic employees are trained to rattle off things like "That has a fruity taste," or "This blend is robust." Very Kuwait, as service is expected to be top-notch in places like Starbucks, Costa, and Columbus Coffee in Kuwait. And this Starbucks is Kuwaiti-owned.

Unfortunately, it's in a strange location. Not even IN the fancy mall, but a few blocks away in a smaller mall. Surely this is due to the amount of space required and the attitude of "They'll just drive," which doesn't reflect the realities of Cairo, though it works wonderfully in somewhere like most of the US or Kuwait, where everyone drives everywhere.