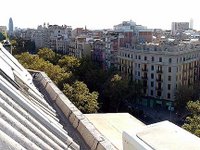 The first time I moved to Barcelona, I didn't go for the climate, the celebrated creative lifestyle, or the fantastic atmosphere. No, I went because, in 2004, a friend got divorced.

"I need a place to live. Fast." He surprised me. I thought he'd been happily married.

"How about Jersey City? I wouldn't mind getting away for a while."

Off I went. Why Barcelona? It was a quick, dirt-cheap Ryanair flight from Herr Marlboro—my then-beau that I'd met in Sudan in 2001 during MariesWorldTour—who was studying in Portsmouth, UK. And my pal Lynne had just relocated to work near Barcelona at Velcro Europe. Finally, the weather was right, the prices not too awful, and my Spanish was less disastrous than my French, Italian, or Greek.

I rented a flat off the Internet. It was well-situated in an upscale area on Diagonal, and looked amazing in the photos. The reality of the little penthouse was quite different.

The flat had been sporadically—if at all— maintained. The walls showed old leaks that needed paint. The bed was a fold-out Ikea bed with missing slats. The kitchenette was filthy, the water heater ancient, and the shower a handheld. But there was a nice view of the city from a tiny terrace, and H.M. hadn't stopped smoking then, so he'd lounge there and enjoy the view. The real problem wasn't the aging structure though—it was the noise.

The owner had run a cable out of the window, so it didn't completely close. Diagonal is a main artery of the city. And was it ever loud.

I lived on Avenue B in New York for nearly a decade. The M9 bus roared by ever 20 minutes. People talked below my window, sirens wailed, and cars honked. Once or twice, someone was mugged under my third-story window. But the noise was nothing like the engine sounds that carried up the canyon-like walls alongside Diagonal.

In Barcelona, it's all about the motorbikes.

The motorcycle rules in Barcelona. So does the moped, the Vespa, motorscooter, and anything involving two wheels and a two-stroke engine. They whirr, roar, whine, zip, and sometimes moan along when they need servicing. At rest, they huddle along the edges of the sidewalks, occasionally bracketed or chained to a post. Pedestrians in Barcelona need keep an alert eye out for Vespas that might come barreling down the sidewalk in hunt of a parking spot.

Parking is more an issue in the old city than the new, because there are not wide boulevards with bike lanes and sidewalks in the old city. There's cobblestoned alleyways and some footpaths. There's nowhere to keep a motorbike.

Last night, I saw an old man zip up Calle Gignas on a Vespa. He stopped across the street from my building.

He got off the scooter and took a padlock off of a bracket on a metal roll-up grate. He rolled the grate up, opened the door beneath… and then pushed his Vespa into his living room.

I tried not to stare.
Posted by Marie Javins at 5:27 PM