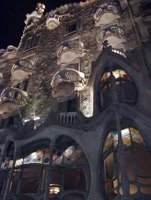 When I moved from Diagonal to El Raval during my first Barcelona visit, the housewarming committee consisted of a lunch delivery man—one plate covering another as he buzzed each building doorbell in his search for someone to let him in—and a dead mouse astride the building threshold.

Streets are cleaned with both sweeping machines and great jets of water in old Barcelona, with frequency that reminded me of when I'd watched old ladies diligently (and constantly) sweeping the streets in Siberia.

On the second morning, the mouse corpse was gone.

No, wait—it had only been pushed across the alley by a jet of water.

On Day Three, the mouse was back in my building's doorway. And so it went back and forth for a week, until Mr. Mouse was no longer recognizable. 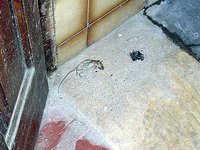 Mice aren't the only things infesting the Old City. In the morning, the cobblestoned streets are peaceful, beautiful in the gentle sunlight, and wet from recent hose-downs. As the day progresses, the number of tourists multiply, to where they're wall-to-wall on main streets like Ferran or Portaferrissa.

That's all right. I'm a tourist too. It's only a problem when I'm in a hurry to get somewhere and even then, I could usually hop on a subway train to avoid the crowds. No, the unpleasantness of this infestation begins with evenings, and something my UK friends call the "Brits Abroad" syndrome.

I loved being able to go to and from Barcelona for two pounds on Ryanair, and apparently so does everyone else. By day, British kids mob the streets. By night, drunk British kids mob the streets. The Swedes do their part too, as Ryanair flies from near Stockholm direct to Girona, though you won't hear of Swedes being famous for their inability to hold liquor. That's an area they get a lot of practice in during their long winters.

When H.M.'s university class came down to study the sustainability of Barcelona in late 2004, many of the other students (who were a bit younger than my then-38-year-old BF) spent each evening in a state of inebriation. One of them was even mugged at four in the morning, right outside their hotel.
Drunk frolickers are perhaps to be held responsible for the puddles of urine and vomit that adorn the main arteries of Barcelona's old city arteries each night.

I guess there's a reason that street cleaners are so zealous here.
Posted by Marie Javins at 4:33 AM

Such a beautiful place...One day I hope to vomit there.