The Woman and the Puss-Cat 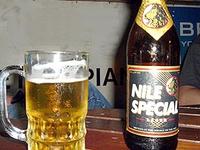 At the end of the working day at Murchison Falls National Park, H.M. likes to come home and open up a Nile Special (local beer) and relax on the sofa on the verandah. Sometimes I use the wooden hammer with screw halfway out (Ugandan bottle opener) to pop the lid off a Coke bottle and I sit with him, ignoring the guilt the nearby laptop seems to throw my way.

On Monday night, we were just winding down from a day of work—H.M. from supervising toilet-building and electrical connecting around the park and me from coloring some Donald Duck pages—when we heard a knock on the screen door.

It was Celsius, the park electrician. He was dropping off some sort of electrical meter. H.M. invited him in for a Nile Special—Celsius opted for a Coke—and we sat down to chat.

We asked Celsius if he knew any of the teachers at the small school in the village where the park workers live. We showed him why—one of my freelance jobs is editing books about girls and horses. I had finished up a recent editing assignment and the hardcover girl-and-pony books I was carrying around were long-since read and digested. They were now deadweight. Surely the kids at the school would like some new books.

I laughed a little and blushed as I explained what they were about. In these books, horses help with crime-solving and rescuing. Kind of Lassie-horses. This could be a bit funny to kids who have never seen a horse.

H.M. speculated that the kids know what zebras are so they could figure out a horse. Celsius explained that in Africa, they have many stories of other animals doing things so it is no problem for the kids.

“For example,” he said. “There was the story they were telling today before digging the trench.”

“You know, the story of why the puss-cat is always with the woman.”

Now I looked puzzled so it was up to Celsius to tell the story.

“Once upon a time,” Celsius began, “the puss-cat lived in the forest.”

“The puss-cat is a small cat and it was not able to feed itself because the other animals took away all the food. So the puss-cat became friends with the lion. It thought that the lion was the strongest animal in the forest, so there would always be food. And the lion let the puss-cat eat the extra food when he was done.”


“Then one day a man came into the forest. And he killed the buffalo for its meat. And the puss-cat said ehh, the man is stronger than the lion or the buffalo, and it attached itself to the man and became friends with the man.”


(The ehh is a noise that Ugandans make to emphasize a point.)

Okay, that's worth the trip to Africa in itself.