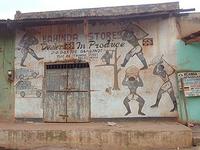 The ranger looked astonished, blinking his eyes at the DED Toyota that was driving away from him in third gear. Then he realized… the truck could not stop or it wouldn’t turn on again. He ran as fast as he could while the gate rangers giggled. He caught up to us, opened the door, and jumped in.

We were en route to Kampala by way of Masindi. We’d left early and given a ride to only one ranger, who was going to the rhino center where Uganda Wildlife Authority was preparing the area for the rhinos that had been newly purchased from South Africa. Rhinos had been wiped out during Uganda’s hard times and they’d be back, but not before a lot of protective measures were introduced.

Herr Marlboro and I were carrying all my luggage and a pillow for his brother-in-law’s seat. H.M. would leave me in Kampala for at least two weeks, while his brother-in-law, niece, and nephew visited in conjunction with H.M.’s big-boss (unfortunate timing). I wasn’t sure if I’d make it back to Murchison before moving to Namibia for September, so the things I normally kept at Murchison—such as the big camera lens and my camping gear—were with us.

We’d driven about 40 minutes when the clutch started to scrape with every shift. I looked at H.M. with alarm, but he was already pulling over.

The ranger got out to help--or rather watch--while I stayed inside. H.M. was a Master Mechanic in his past life in the Munich suburbs, and I was a comic book colorist and writer.

H.M. dug around in the glove box for a while. He looked for tools behind the seat. He sadly eyed his mini-Leatherman and wished he’d invested in the full-sized model.

He announced that there was a leak in the clutch fluid system. This wasn’t really surprising as Africa is “hell on wheels” and on the rest of the car too. H.M. then took the hose off the windshield fluid reservoir and popped the lid off the brake fluid. He sucked. He made a face when he caught the taste of brake fluid.

H.M. put the brake fluid into the clutch fluid system. Problem alleviated, but to tighten the whatever-was-at-the-leak, he needed a certain wrench. 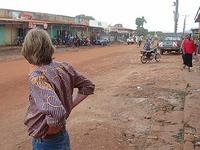 A Land Cruiser pulled up behind us, carrying a British man and Australian woman. They worked in a lodge in the Serengetti and just happened to have a full-size Leatherman on them.

H.M. lay down on the ground and took the Leatherman under the car. He had me pump the clutch a few times and—voila—we were mobile.

Our new system worked for a while but it was eventually clear that we were still shedding fluid. He paused and looked again. “We cannot stop any more,” he muttered.

We made it to the gate.

“Open the gate! Open the gate!” Our pleas could not be heard by the ranger who casually strode over to swing the gate open. He was used to H.M. stopping and saying hello. They don’t get a lot of entertainment at these ranger outposts.

We stopped at the closed gate. The truck engine cut off. Big sigh all around.

H.M. started to suck more clutch fluid, but when he crawled under the truck, he realized that a gasket was needed. Even my offered duct tape, found deep in my luggage, wouldn’t help.

“We will have to push-start and go in third gear to the Masindi Shell station,” H.M announced. Which is how we ended up driving away and nearly leaving our helpful-pushing ranger behind.

There were two potential pitfalls with driving to Masindi without stopping, and both of them were busy intersections with stop signs.

Somehow we made it to Masindi without a single stop. H.M. and some Shell mechanics crawled under the Toyota while I went (where else?) to the Internet café.

He pulled up 40 minutes later for lunch. The truck was fixed. Great. We found the ranger, who had gone wandering around Masindi. We stopped to turn in our Coke bottles for the deposit, and headed towards the rhino camp.

It wasn’t long before H.M. discovered that we were again stuck in third. We were able to stop near the rhino camp, but could not go into it. (Too bad because I wanted to see if the rhinos were there yet and H.M. wanted to eyeball their solar electric fence for ideas on how to make one of Murchison’s airstrips into a place airplanes could land instead of the park’s number one antelope habitat.)

It was a joyful moment when H.M. managed to get the truck into fourth gear, but this made for a horrible racket once we reached towns with speed bumps. We were carrying three massive (empty) oxygen canisters in the back. He was getting them refilled in Kampala for welding purposes. The water tank at the education center had been raided by elephants too many times and a massive stand was being welded together--one that was too tall for elephants to get their trunks into.

Finally, we found a Shell with a mechanic’s bay. H.M. was able to casually step under the truck instead of crawling. He messed around with it a little bit and then, mysteriously, it was fixed. It had just had a little impediment in it and had been repaired in Masindi.

On we went to Kampala. H.M. would head to the airport the next evening, while I would get back to my regularly scheduled program of taking minibus taxis to wi-fi hotspots to upload files.

The next morning, when I took a minibus taxi to the hotspot, its clutch gave out. 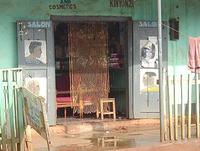