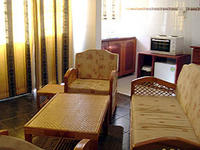 I have an apartment in Bbunga, a suburb of Kampala. I use it when I'm not at Murchison Falls with H.M. (who doesn't smoke anymore but still looks like the German Marlboro Man) It's a sort of long-stay hotel and isn't cheap, but as an expat staying for only two months, I didn't have access to inexpensive places. Anyway, it's half the price of staying home so I can't complain.

Since I don't have a car, I use public transportation. Every day I walk up to Ggaba Road and flag down a minibus. These are called "taxis" here but some may be familiar with them as "matatus," the Swahili name popularized in Kenya. They are licensed to carry 14 passengers, one driver, and one conductor, but the local routes cram in as many as they physically can.

For 300 Ugandan shillings (.15 euros), I get a lift about 10 minutes down the road to Kabalagala. There is one of a few free Ugandan Telecom WiFi Hotspots here. (Free during the 2-month introductory period, which coincides nicely with my stay here.) The WiFi at "Chateau" doesn't let me use Mail or Outlook and doesn't let me go on any servers for FTP purposes, but about 2/3 of the time, it gets me on my e-mail. (If I want to do anything more serious, I have to get a "boda-boda," or motorbike taxi, across town to an upscale coffee shop in Lugogo.)

Public transport in Uganda is no different than public transport anywhere in one respect: no one talks to each other and we all stare straight ahead. Think riding an elevator, one that is overcrowded and has a constant soundtrack of honking and a guy yelling "Ggaba Ggaba hey" (I made up the hey but you get the point). 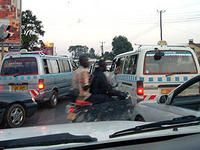 Every once in a while, a rebellious individual will quietly strike up a conversation. One day, the young man sitting next to me did this.

"Excuse me, are you born again?"

"Yes, but not all Americans are born again."

"All off the Americans in Uganda are," he said firmly.

We both returned to staring out of the window.
Posted by Marie Javins at 2:26 AM

Catherine wants to see a photo of the "Marlboro Man!"

Ach, H.M. is quite a private man... he might object. But if you are sneaky, you can spot him at the end of "MariesWorldTour.com." Click on "Journal" and go to the end.