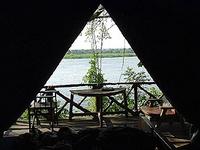 H.M. and I were blissfully sitting on the banks of the Nile, enjoying a Coke and a Nile Special in the shade. He had taken me to Nile Safari Camp as a late birthday present. The staff had presented us with cold towels as we’d arrived—a switch from the usual steaming hot towels but this must have been a relief to people who’d traveled for hours over dirt roads. We’d driven only 20 minutes from our Paraa home but nevertheless accepted them gratefully.

The man disturbing our afternoon was an overweight American. The staff was smiling and staring at him, uncertain of how to react. Yelling at Africans always produces a smile and deer-in-headlights kind of reaction. It is considered bad manners to lose your temper in public.

“I don’t care that your rooms don’t have keys. I want a key!”

We left the man to his yelling.

Our cabin on the Nile was a kind of tent on a wooden frame and stilts. Cute little monkeys bounded around the roof and outside shower, which was enclosed by a large tarp. In the evening and morning, the staff poured hot water into the container above the shower. The stilts meant that there was a nice breeze and we didn’t get too hot. It wasn’t 4-star by international standards, but to us, it was pure luxury.

We headed to the pool for a lazy afternoon. After a sunset on our cabin verandah, we sat in the open-air restaurant for an excellent dinner (although the next morning’s English breakfast on our verandah could not be beat). We’d just finished a banana cake dessert when we heard a familiar voice.

Groan. Not all the cabins were tents but they did all have mosquito netting for windows. I wondered how a key was going to secure anything. Plus there were no locks. How could you have a key to a non-existent lock?

The situation deteriorated. The man absolutely started sputtering once the manager arrived.

“We’ve driven through villages of beggars to get here! I want a god damn key!”

Villages of beggars? I wondered how he’d gotten here. The nearby village housed park rangers and their families. Our friend Celsius--park electrician and teller of the puss-cat story--lived there. The trading post outside the gate was full of people selling sugar cane and bottled water. Masindi was hardly a village and certainly not full of beggars (aside from one old man who went around begging cigarettes off everyone, local or foreign).

The staff and manager’s responses were inaudible, but it wasn’t hard to figure out what they were given the context.

“Don’t tell me not to cop an attitude! No one here has been helping me and I want a key.”

Then, a murmured response about mosquito-net windows.

Whoa. This was just embarrassing. “We aren’t all like that,” I thought a bit helplessly. Where was this overweight cowboy from? Texas? Wyoming?

Apparently he was from Maryland. And word was that he worked in Kampala for the American Embassy. Could this be real?

In the end, the manager bored a hole and fitted a lock at 10 p.m. at night, obviously done to shut the customer up. All the other customers were giggling conspiratorially and laughing as the charming fellow followed the manager to his cabin. I had a laugh too when he came back later and sheepishly asked if he’d left his camera at the front desk.

What an embarrasment to Americans... but especially to Marylanders! o_O

I can understand his concern... but it seems like he was the one to be afraid of! ;)

eek! the "ugly American" is still alive & well and hired to represent the U.S.! OYE! as for his camera - all I have to say is Karma baby, Karma!