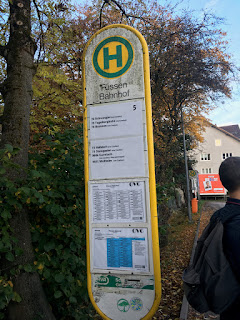 Several months ago, when I was first told by my job I would be attending Frankfurt Book Fair, I attempted to book an entrance ticket for Neuschwanstein Castle.

"Booking for this day is not possible." Was I too early? No. I tried again several times. Apparently, I was too late.

How could this be? Too late for a Sunday in October? The following Sunday had plenty of space. Oh well.

I decided to just hang out in Munich on Sunday, October 20th, but then when I took an early train from Frankfurt to Munich on Saturday morning, then walked 26,299 steps (more than 11 miles, according to my Fitbit), I fit in pretty much everything I felt I absolutely had to see. The castle took precedence over any museums, and shops are closed in Germany on Sundays anyway, so I decided to wing it on public transit. 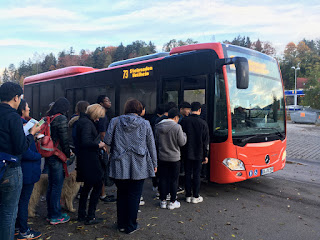 Sure. The train wasn't the problem. It was all the reports of ridiculous queues that seemed problematic. The castle isn't the only thing King Ludwig's house has in common with Disney World.

I decided my sleeping schedule had been so erratic (thanks, jet lag), getting up at 5 a.m. to get the first train out would be easy. And it was. I'd purposely booked a hotel by the train station so as to avoid dragging my luggage all over Munich, so I was on the platform ten minutes after leaving my room at MARC Munchen. I was a bit early so I headed down the escalator to the Starbucks that opened at 4:30 (I'd scouted it out the night before), and that's how I was able to avoid one of my big early-travel problems now that I've been avoiding cow dairy. I'd learned to deal with soy lattes in Tokyo, but here in Germany, it's easy enough to find mandel milch, or almond milk. I've only seen one place with Oatly so far, but I've only been in the country for six days. (If I do MariesWorldTour 2021, I realize I'll have to go back to drinking black coffee like I frequently did in 2011, or switch back to moo-milk. That's far enough off I have no idea if I'll still be avoiding cow and goat dairy by then.) 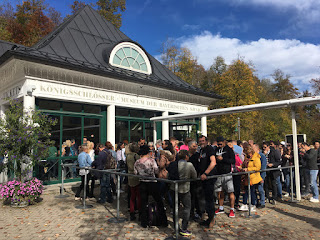 I'd used the Deutsche Bahn app to get a mobile phone Bayern Ticket for the day. These are 25 euros and go from almost midnight to midnight on weekends. They work on the local trains, commuter trains, and the buses, so this covered my trains to and from as well as the buses on the Neuschwanstein end of things. I was on the 5:52 a.m. train to Füssen—the first direct train of the day—which arrived at 7:55. That worked for me, since the ticket office opens at 8:30 in the "off-season."

The train seems to be carrying straggling partiers from the night before, me, and a bunch of young Korean tourists. By the time it got to Füssen, the partiers had all disembarked. 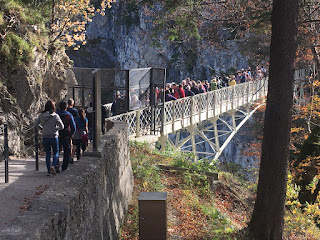 The Korean college-age travelers and I spotted the bus as soon as our train pulled into Füssen, so we all rushed over to stop #5 to board. The #73 and #78 buses (see links to schedules at bottom of that page) both pull up at stop #5, where all the tourists pile in, then it goes ten minutes to Hohenschwangau/Castle. Everyone piles on at the same time and off at the same time, so you can't possible go wrong, but if you're worried, listen for the call-out on the bus speaker and watch for the bus stop by the tourist information center. Remember you can show the driver your Bayern Ticket so you won't have to pay for the bus. I'd looked up the times for the buses in advance, so I was aiming for the 0805 bus, but this one was a little early. 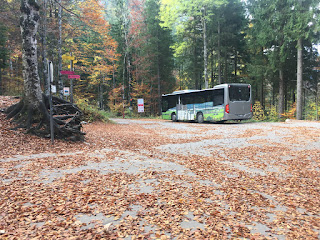 Once off the bus, we all rushed up the hill to the ticket center. There are signs telling you where to go once you're off the bus. We all lined up and waited for the 8:30 opening, then surged in through the winding queue, like when you're at an airport or Disney World. I was in maybe the third row from the front, and people with reserved tickets had their special own queue. I glared at them with jealousy.

A screen indicated availability and I watched as each slot evaporated. Tours start at 10, and I figured I'd get close to that and be on the 12:05 train back to Munich, latest. But no. By the time I'd gotten to the counter, the earliest I could get was a 10:55 audio tour. (You're not allowed in the castle on your own.)

My ticket and I stopped at an overpriced cafe for a snack I neither needed nor wanted, but what else was I going to do until 10? I headed to the shuttle bus a bit on the early side, packed on with a tour group. 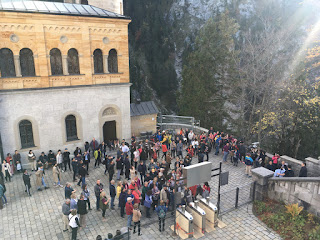 The shuttle bus is 3 euros return, and it goes to Mary's Bridge, a scenic if somewhat terrifyingly high lookout. Which you can do even if you don't score a ticket into the castle.

Next, I walked about ten minutes downhill to the castle courtyard—you can go here too without a ticket. If you just can't get a ticket, you could do everything I'd done so far without a purchase.

In the courtyard, everyone milled about waiting for their entrance time to be called. Mine was tour #435, and when 435 flashed on the screen, I was first in line to go through the turnstile. I still had a notion I could whiz through at my own pace. Wrong. You go through with a guide, who tells you when to stop and start, and you will go at the pace they tell you to go at. There would be no 12:05 return for me. 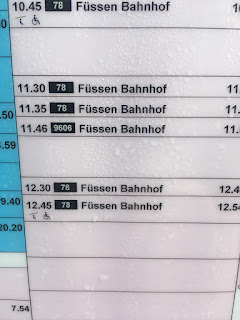 The tour is pretty good. You can do the entire trip without actually going on the tour, and it would save you a lot of aggravation as far as acquiring a ticket, but that's a last resort since if you'd come all the way here, you might as well go see the intricate detail of King Ludwig's palace. I'm not going to say it's missable, because it's cool. But I can see how it might be tempting to just take in the views and then head back to Munich. I almost, but not quite, recommend doing exactly that.

By the time I got the shuttle bus back down the mountain and walked to the #73/78 bus stop, it was one minute after the 11:46 bus back to Füssen, so I took my time and stopped in souvenir shops. But then I saw a bus leaving and realized they don't necessarily adhere to the schedule on big tourism days. They just show up whenever. I went to line up for the bus, which is at a sign that says BUS TO FUSSEN. Again, you really can't miss it.

The bus showed up (marked FUSSEN) after a few minutes and carted us all back to the train station. 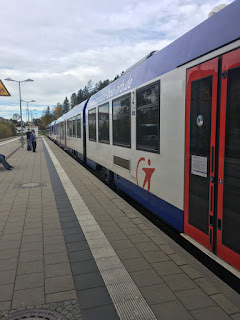 The next train wasn't until 2:05 p.m., though, so everyone headed out into Füssen to see what they could find.

Except for me and about 8 Korean college students. We'd all worked out the connecting train schedule. We grabbed carryout sandwiches and boarded the 1:05 AUGSBURG train. I took it as far as KAUFBEUREN, where there's a connecting Munich train. You can also connect at the next stop BUCHLOE. You're connecting to the same Munich train, so it doesn't matter which stop you change at. I chose Kaufbeuren because it had a few more minutes connecting time, and I didn't know what to expect when I got there.

What I found was the Kaufbeuren-Munich train arrived on the same track as my previous train, just a few minutes early.

As a bonus, these two trains were nearly empty, much nicer than the packed direct train of the morning. But this connection was not on the DB app—I'd had to work it out myself.

Just after 3 p.m., I was back in Munich, heading over to my room to take off my shoes and rest before packing. 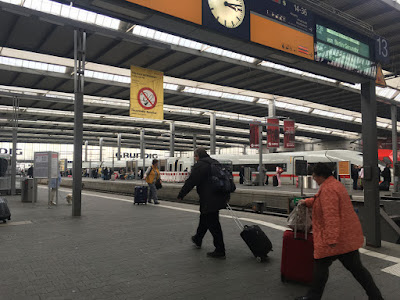