From Bangkok to Taipei 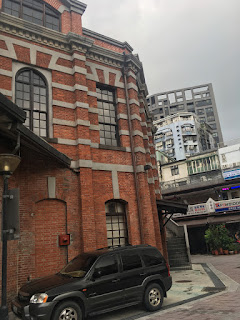 The airport lines were nuts at Bangkok's big airport today. I didn't remember that being the case from my past trips. Maybe it was a freak thing? Or maybe I'd left so many times from the old airport, I just hadn't been in a position to notice.

After passport control, I had just enough time to grab a dollop of Duty Free Shop sampler moisturizer (I'd run out yesterday), buy a soy milk latte and croissant (I'm in the middle of not eating wheat, corn, or dairy for reasons to complicated to explain, but basically I'm fighting off gut bacteria with a month of antimicrobials and orders to not eat what I was about to eat and this was my first bread in four weeks), and only just got on the plane before the doors shut. I quickly purchased the Lonely Planet digital guide to Taipei and downloaded it before takeoff. This was my reading material for the flight.

Travel=glamour, I thought with a touch of irony. Next stop: Taipei. All-out tourism stop for three days. "Why would you want to do that to yourself," Mr. Fixit had asked when I said I planned to get out of bed at four in the morning. I stared at him blankly. Obviously, I wanted to get as much time in Taipei as I could in the next few days. 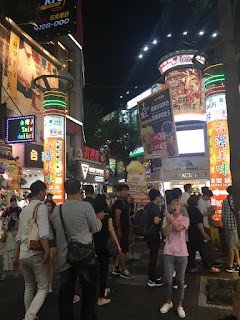 He was right, as it turned out. On landing, I was able to find the train from the airport to the central train station, and once there, I was eventually able to locate the metro in the labyrinth shopping center attached to the station. It was only one stop to the hotel at Ximen metro, which I'd have walked if I weren't dragging luggage. But I became dizzy and nearly passed out as I headed to the escalator out of the metro. Dehydration from last night's food poisoning, I thought, but that's just a guess. Dr. Marie is actually no expert on these things.

The staff at CityInn Hotel Plus was delightful, and stashed my bag so I could head off to be a tourist until check-in time. Ximen has a pedestrianized zone which is full of young people (and tourists too but mostly young tourists), so I wove through them and found an all-day breakfast place I'd spotted online. I wanted to gently ease my innards back to the notion of eating after the previous night's drama.

I skillfully managed to order two breakfasts when I only meant to get one. Ha. Well done, self, I thought as I picked at both. I thought back to my Cantonese class in the early nineties. The teacher had been from Taiwan and had taught me and Renee a few differences between Cantonese and Taiwanese. Unfortunately, learning how to say "how are you," "fine," and "thank you" had not prepared me for properly ordering eggs. 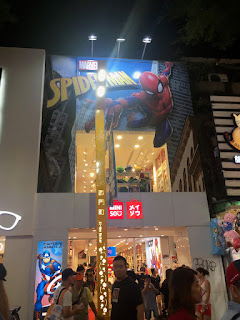 After second breakfast, I raced over to the Sunday craft market at the Red House. (See? Reading the guidebook teaches you stuff.) I enjoyed it though I didn't see anything especially unique, and afterwards, I headed back to my hotel to check in and nap for a few hours. I awoke to the sound of rain in the bathroom. This was a problem with the A/C unit, which was raining through the ceiling. The desk clerks switched my room, which was a bummer as the raining room had a nice view of the outside world, and the new room had only one window, a frosted window in the bathroom.  Ah, well, it's important to not have interior rain.

I headed back out at twilight to investigate the pedestrian zone and search for food. And then I ran into this.

A Marvel store. A store completely dedicated to Marvel. My, how the world has changed.

I walk around until I became completely disoriented. I was reluctant to stop at the restaurants I saw due to my tender belly. In the end, I purchased and ate a scallion pancake made by a one-armed man with a street cart. I followed this up with a street mango.

Good thing I’m going home soon, I thought. I was no longer able to feed myself properly. 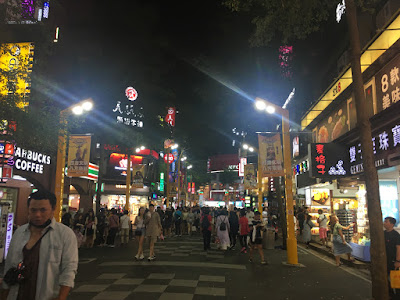 Categories: Bangkok, Taiwan, Travels with Myself

What a busy environment to be in!