Some Things Last A Long Time 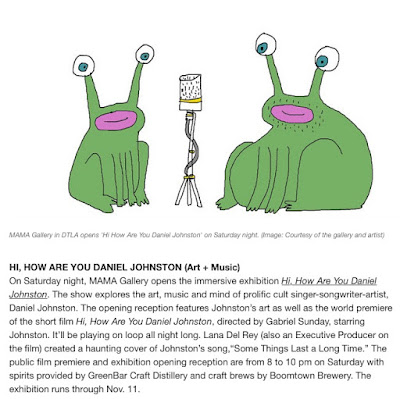 But then as Saturday night rolled around, I thought about how it was at the far end of DTLA, on the other side of Skid Row from the metro. I looked up how to get there--there was a bus. But the idea of taking the metro to the bus to a gallery when I could just download the movie seemed kind of goofy, so I tabled the idea.

I made a cup of tea around 6:45 on Saturday night and settled in to look for some appliances to put in my house in Jersey City. As the tea steeped, I got a note from a friend.

He sent me a link. Daniel himself was at the opening, sitting in the corner.

I left the tea steeping, grabbed my bag, and made a beeline for the metro. Every time I see Daniel, I wonder if...well, it doesn't matter what I wonder. It's hard to see him, anyway, without going to his house in Texas. When he plays, he's not out in the audience anymore. It's not in small clubs where you can just barge backstage. He plays big places now. Last year, he opened at the Hollywood Bowl. I just missed the train, and had to wait ten minutes for the next one, then just missed the connecting bus, but another one came along going in the same direction, so I took that instead, and easily found the gallery.

Daniel was in the corner on a sofa, spacing out. Funny thing about memory--he forgets so much current information, but even out of context, away from New York or Austin, he spotted me in a second. "Marie!"

I headed over, and helped as much as I could to get him out after the show. Jeff, the director of the Devil and Daniel Johnston film was there, and he took this photo of me and Daniel.

"Want to come back to my room with me and my brother and get a pizza and talk about comics?" Daniel asked. I tried to change the subject, but I'm getting worse at it. I used to be able to turn it to Captain America on a dime. Maybe he's just wise to me.

"I need to go home and go to sleep, Daniel," I said. "We're not getting any younger."

I looked at him for a minute, this man who shakes as he sings and plays, who goes into moments of spacing-out, which he has for years now. Once he did this at the Old Devil Moon on East 13th Street and my friends said they thought he'd been about to stab me with a fork. Which of course wasn't at all what was going on. He's been on meds a long time, but meds don't make him mistake his friends for his dinner. Every time I see him, okay, let's just say it. I worry it's the last time. That's why I left my tea and ran to the metro.

But this wasn't the time to talk about that.

Instead, I said "You're right, Daniel. We're both still young."
Posted by Marie Javins at 11:51 PM

Sweet but sad. Glad you went.