What's gross about my new apartment is someone's medium-length black hair is just...everywhere. I Swiffered a lot of it up, but there's always more. It's embedded in what is either linoleum or vinyl on the kitchen floor. It's hidden in cracks and in corners. It shows up on my cauliflower when I cook. And at 6:30 this morning (a Saturday), the smoke/carbon monoxide detector loudly declared I needed to check its battery. Thanks, detector!

I had to pick up some Teflon tape from Home Depot because the shower head was spurting, but that wasn't a big deal (and I got to see a possum on Sunset Boulevard from the bus window). The ignition thingy for one of the stove burners clicks at strange times, and one burner doesn't work. I looked it up, and a little piece needs replacing. I should probably leave that to the building manager.

Also, I really did screw up by taking an apartment on the parlor level. What happened to me swearing never to do that again? I was so tired of looking and the location is good. I hear WAY too much I don't especially want to hear. Cars going into the driveway next door. Neighbors heading to the backyard to talk on their phones. Too much music, too much television. 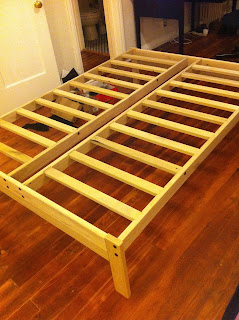 All that said, I love the building laundry room, someone else having to deal with the trash (I just throw it in the dumpster), the old character of the building, the building manager and her little dog, unpacking, the fact that someone receives my packages and I don't have to get them sent to work, and how I can walk to the bus stop at the end of the block and be in Burbank in 15 minutes.

Of course, it doesn't always work like that. If I get out of the house after 8:03 and before 8:30, I take the metro, but connecting to the bus in Burbank makes it a 40 minute commute. Still not too bad, though the return trip at night makes no sense because of traffic. For whatever reason, traffic is terrible after work and fine before work.

I am head-over-heels in love with paying normal rent. It's still more than I paid at home, but it's a lot less than I'd be paying if I hadn't opted for an older studio apartment. And being in Hollywood means I can walk to pick up a lot of things, though one of the local supermarkets just closed. 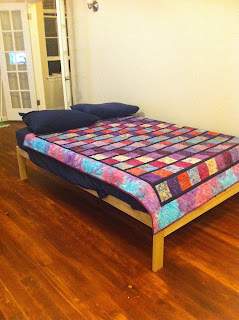 I own a bed now, a $149 mail-order frame and an IKEA memory foam mattress, though I haven't figured out the right place to put it. The dining room table and desk are set up. There's a short list of things I need—kitchen cart so the microwave can go somewhere, ironing board and iron, over-the-door full-length mirror, a mop, a vacuum, maybe a television at some point, or maybe not. I might want a second glass, though there is something quite appealing about living with one of each dish and no extra anything. But you never know, I might have a visitor, and it would look silly to say "You have to share my glass. Here, you sip, then I will."

I haven't sorted through everything I brought along yet, simply because it's hard to find the time. It's all in neat piles, probably on top of medium-length black hair.

I am resigned to being here for now, but I can't say I'm enjoying myself. It isn't bad. I've made the car-free thing work for me pretty well, and my biggest complaint is food truck lunches. But I miss my house and my friends.

But I'm looking forward to the part where I don't have to endure winter. That might be okay.
Posted by Marie Javins at 12:52 AM