If Only All Skepticism Were So Easily Cured 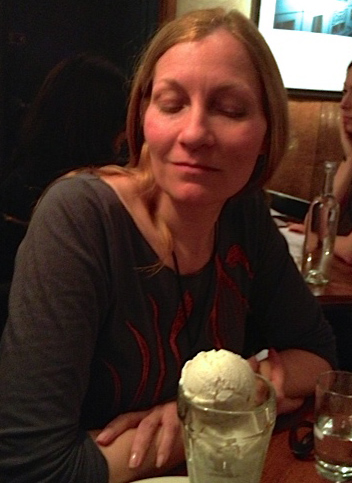 Remember my friend Amanda? Okay, you may not. It's been a while since we last saw her in Australia.

Oops. No we didn't. Or rather, I saw her, but I didn't write up my whirlwind few days in Sydney in November of 2011. Probably because they seemed so normal and not the kind of thing people want to read on a round-the-world blog.

I'd been camping in Perth, then went along with one of those small groups in Tasmania. I caught a Virgin Australia flight up to Sydney then, and met Amanda and Doug to trade off my camping gear for my Aranui freighter ticket. The Aranui wanted me to have a paper ticket, but of course I was long gone by the time the ticket was issued. They'd sent it to Amanda in Seattle, and Amanda had brought it to me. She herself had been on the Aranui only a few months earlier, on assignment for a travel magazine. And she was happy to go camping for a night with my cheap tent.

I've seen Amanda other times of course, but you might remember her from dosa night in Jersey City.


Right now, she's in town for a conference about Canada, and after a few days of that, she'd settled into a tiny European-style hotel near NYU and the New School. I'd tell you about it, but it's one of the better kept hotel secrets in Manhattan, so I mustn't. Though I've never stayed there, of course, what with me having an apartment and all. But two men I met in Morocco in the nineties had mentioned it to me, and I've always wanted someone I know to try it. But people get put off by the bathroom down the hall thing. But it's not like there's only one and it stinks. And you know, that's why guys in sweatshops invented pajamas and sweatpants. So you can walk down the hall to the bathroom at night. Or do you pee in your bed like a baby when you're at home? It's not so different. In fact, the bathroom at the Larchmont (oops, I gave it away) is closer to the bed than the bathroom in my railroad apartment.

Anyway. Amanda checked into the cheap no-longer-secret place and walked up to meet me at a coffee shop I like in Chelsea. I'll tell you that one—it's Champignon. I go there because it's not overly packed like certain chains or Grey Dog, and it's not pissy about laptops like the appropriately named Cafe Grumpy. (I get the point of the laptops, but apparently iPads and iPhones are okay, which is kind of ridiculous, especially since I had to put away my iPad keyboard to be allowed to stay at Cafe Grumpy. Because, you know, poking at a screen is vastly different than touch-typing. And you know what really pisses me off is Cafe Grumpy serves flat whites, which are yummy, and I am conflicted because I want a flat white but I don't want to poke at my iPad and if I buy a coffee and sit there wasting time on Facebook on my iPad, how is that appreciably different from me actually doing something useful on my laptop? Do they also not allow people with books because they might stay too long? Grumble.)

Amanda showed up and we walked up to see two photo exhibits on Tenth Avenue. And we finished early, too early for dinner, so we wandered up to the High Line for a bit, then back down to 23rd Street to the Half King, which was fitting since one of the photo exhibits we'd seen was of Tim Hetherington's photos, and his colleague Sebastian Junger is one of the owners of the pub.

Half King isn't somewhere I adore for the food, which is okay but not amazing. But they do have events where writers read, so I have been there plenty of times. But I'd never seen Sebastian Junger there until last night. "He's right over there," I whispered to Amanda.

He didn't see us, of course, because he doesn't know us, but it was kind of cool that he was there, especially since I'd just heard him on the radio earlier in the day, and seen him speak at the Metropolitan Museum of Art last week as part of a series of talks supporting an exhibit of Civil War photography. I'd also seen Tony Horwitz and Geraldine Brooks speak, and they were funny and fascinating too, and I'm currently obsessed with Brooks book March.

And after dinner, after Mr. Sebastian had left and an erratic guy I used to know had wandered in instead (we were able to avoid him), the waiter came back and asked if we wanted to try dessert.

"What is THIS," I asked, pointing to the menu. "Malted milk ball gelato? How could that be good?"

He smiled. "Actually, it's delicious."

We had to try it then.

To our surprise, malted milk ball gelato at the Half King is outstanding.
Posted by Marie Javins at 9:47 PM

Better than Limca, then!