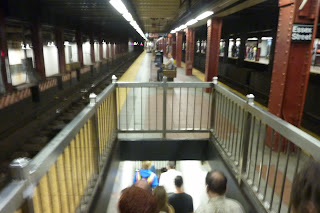 Has it already been a month since Michael Kraiger and I descended under NYC's City Hall to see the Jewel in the Crown closed subway station?

And while that excursion was fascinating, as was the free art opening of the bridges watercolors at the Transit Museum, I only bought one ticket for the next event, because it was much more expensive, and I bought the ticket several months ago, so it was too long ago for my usual partners-in-crime to commit. Instead, I joined 30 or so strangers, all of us showing up at 12:15 in the middle of the Brooklyn-bound J-train platform to sign waivers for our trip into the creepy old trolley terminal. 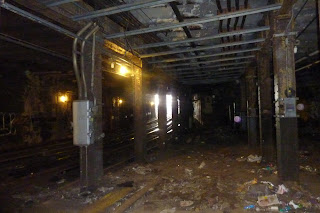 An MTA employee unlocked a gate above some stairs, and the group of us filed down and through a door, into a corridor with several other doors leading off of it. A man led us through one door, and I suddenly regretted wearing sandals and just getting bright pink polish put on my toenails.

This was...dark, dirty, a bit wet at places, and kind of scary. 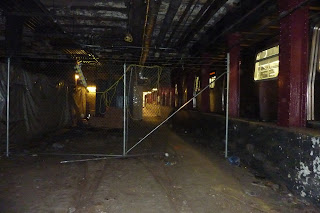 It's hard to imagine this eerie space turning into the LowLine we've read about on Kickstarter. And indeed, that may end up being no more than a pipe dream. Our guide explained to us that while everyone loves the idea of a LowLine, there are protocols to be follow, bids to be made. Community input to consider.

It didn't take me long to want to be out of the old trolley terminal and back above ground in the sunlight, and I couldn't hear the guide very well with all the J trains creaking by, but today's journey underground was certainly unlike any other. 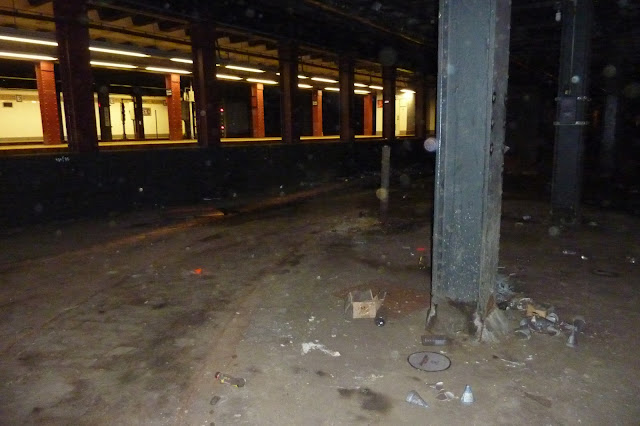