Overnight Down the Shore

The phone across the aisle rang—loudly—all the way to Atlantic City.

And the bus sure was skanky. I'd been fooled by the Greyhound Lucky Streak website, which shows sleek wi-fi buses that feature power outlets in each row. Before you laugh too hard at me, note that BoltBus manages these things. And Greyhound owns BoltBus.

When we turned east onto the Atlantic City Expressway, I started to get excited. At what, exactly? I really have to get out more.

I'd chosen the departure that left at 5 p.m. for Caesar's. I'd scored a $50 room at The Chelsea, a new four-star boutique hotel near the Tropicana. Which was a hike, I knew. If I'd taken the Academy 5 p.m. bus, I could have gone straight to Tropicana, but I'd elected to go Greyhound on the logic that they had wi-fi (joke was on me), and I didn't know what the situation would be at my hotel. Many hotels charge a fortune for wi-fi, and then I'd just use my phone for internet.

(Note to self: find out how to tether my phone so I can use my laptop with it. I could do this in 2002 with my Motorola phone and Verizon. How hard can it be with modern tech?)

On arrival at Caesar's, everyone on the bus got a voucher good for $25 worth of slots. But first we would have to go to the Total Rewards desk and sign up for the loyalty program.

What the hell. I did it.

The man behind the desk was good-natured about my probing questions. Could I turn in the voucher for cash? No. Could I use it at more than one machine? No. The deal is: You use it once, on one machine, or maybe come back later and use the same machine. The original $25 you never get back as cash. You only get your winnings on the $25.

I'd come back later for the slots. I pocketed my new Total Rewards card and my voucher, and walked down Boardwalk to my hotel.

To my right were the dark, closed T-shirt shops and salt water taffy stores, dwarfed by neon-lit casinos. To the left was the giant sand dune, behind a railing. Just beyond is a beautiful beach and the Atlantic Ocean, but I couldn't see it from here.

I walked to Tropicana, then on to my hotel.

The Chelsea is the old Holiday Inn.

I've stayed there twice before, once with Turbo and once with Herr Marlboro. Given a choice, I'd have avoided it.

But I had prepaid on Priceline, and actually, it was a decent hotel even when it was a Holiday Inn. So I shelved any sentimentality, and headed through the revolving doors to Reception.

Oh, and wi-fi at The Chelsea? It's free. 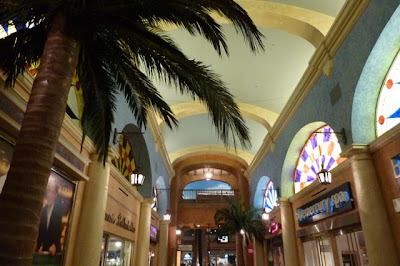 The Quarter at Tropicana is intended to evoke Havana. To which I can only chuckle and suggest that the designers have never been to Havana.
Posted by Marie Javins at 9:40 AM