Revenge is Sweet, and Comes with Milk 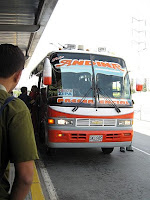 C was sitting on the Colombian minibus giving me the evil eye. When he bothered to look my way at all, that is. Oh, the fury. I snickered on the inside. He was behaving like...like me!

We'd gotten up early (which wasn't hard given that neither or us slept on the creepy plastic bed) for our day trip to Zipaquirá, We hadn't stopped for breakfast in hotel reception. It would have taken an hour and surprised the sleepy desk attendant. We'd stopped by Juan Valdez, the Colombian version of Starbucks.

Then, disaster! It was closed. So was everything else. Semana Santa, you know.

"We'll get coffee at the bus station," I reassured my caffeine-addicted companion. (Those of you who have followed all along know that I have my own caffeine problems, and if Turbo were to read this blog, he'd no doubt cackle with revenge-glee.) We caught the TransMilenio, a double-bus that winds around Bogota on its own lanes. Half an hour later, we disembarked at Portal del Norte.

And promptly got stuck inside the station. We could see an overpass, but couldn't figure out how to get to it. Plus if we went through the turnstiles we'd just crossed to get out of the TransMilenio lane, we'd have to pay again. Just to get out.

We could see a little shop across the highway. But seeing doesn't equal being able to get to, so we got on the minibus instead.

Grrrrr. I could feel the frustration. I am ashamed to admit I cheerfully looked out the window and giggled. He'd survive.

A hour later, in downtown Zipaquirá, we stopped in a small bakery for coffee and assorted bread.

"Leche con cafe again?" C was in a better mood now with his caffeine fix in front of him. Almost all the coffee we got in Colombia had way too much milk, no matter how C begged in Spanish.

We finished our hot milk with coffee and caught a taxi to our destination. The Salt Cathedral of Zipaquirá.
Posted by Marie Javins at 7:18 AM

Let's just hope this "C" character has his coffee before he reads this post.

For the record, I'm one of the grumpiest people ever when it comes to NEEDING that morning coffee fix. The only reason I could stand this situation is that this "C" character made me laugh by showing me a mirror.