Our Mission: To get from Cartagena to the fishing village of Taganga, four-hours-and-change Northeast along the Caribbean coast.

The guidebook and photocopied pages I'd made of my "South American Handbook" wanted us to take a taxi to the Cartagena bus station, a bus two hours to Barranquilla, then another bus two hours to Santa Marta, then a minibus or taxi over the hill to Taganga. But a little on-the-ground research led us to a "Marsol" direct shuttle, straight from Casa Viena hostel in Cartagena to the marketplace in Taganga. 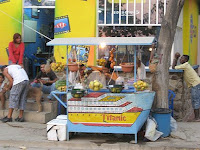 Why Taganga? It was a waystation en route to Tayrona National Park, where we were headed tomorrow. Santa Marta was the nearer city, but it was Easter week and Santa Marta was filled up. I'd also read lots of reports that Taganga was the happening spot at the moment. (Translation: the Khao San Road of Colombia.) I wasn't sure Taganga was our choice over Santa Marta but this I knew: We had a room in a new hostel in Taganga. Easter week is a terrible time to look for accommodation in Latin America, so we'd stick with what we could get. 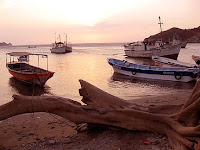 Santa Marta and over to Taganga. Two college-age backpackers behind us exchanged information. "I'm hoping to get on a Ciudad Perdida trek tomorrow. But I don't have any hiking boots." "Dude, I bought mine yesterday. You can get them here."

To nickname Taganga "Khao San Road of Colombia" is a disservice to this lovely town on a bay, but it is not wholly inaccurate. The number of backpackers seemed to equal the number of residents. We headed up to our hostel, where we learned that the paint was still drying. The room itself was tiny, with a ceiling fan, a shower curtain that served as a door on the small bathroom, and open-air patterned carved areas in the wall rather than windows.

And what a night it was! The wind was ferocious and tore in from the sea, sending things that were tied down loose from their tethers and whirling overhead. Dogs flew. Okay, exaggerating a little. Dust covered us, our possessions, the room, the entire hostel and the entire town.

Neither of us slept much.
Posted by Marie Javins at 12:45 PM

Beautiful pictures. What kind of camera, megapixels, and "x" zoom do you use, please?

My wife and I are just back to Canada from Puerto Plata - 28' celcius each day and very low risk of malaria. is it as hot for you where yuou are now as it was in Cartagena?

Cartagena was the hottest place we visited. The other places were hot too, but it was easier to get under a tree in the shade.

As for the camera. the trick here is in Photoshop It's just a little automatic point-and-shoot. I shoot on high and then that gives me more flexibility in cropping and manipulating. So I end up with something acceptable for the web.

I have an SLR, but it's from 2001 and is a film camera. I've actually quit using it at this point, but have been too cheap to invest in a digital SLR since all my photos have been for the web lately.

C has a professional-level camera and lens, the skill to match and posted some great images from our trip on his blog.

Alas, Photoshop is too expensive for me. I've added "C's" blog to my short "worthy to visit" list along with yours and Ed ward's. Thanks, and be safe!

Yeah, my most recent Photoshop is on my work laptop (thus purchased by my company). My older one that I bought doesn't work anymore on the new OS. (though it worked on the ancient laptop I took to Colombia.)

But there is this thing called Photoshop Elements that might do everything you need. It's pretty great, though not for print. It often comes bundled with other products, like scanners or Wacom tablets.