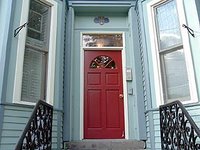 Soggy matches in the bottom of the dishwasher.
A purple stain where a drink fell on the pine floor.
A broken hair dryer.
Splattered candle wax on the wall.

I glumly surveyed my apartment. I’d just driven six hours up from Virginia and all I really wanted to do was sleep.

A cigarette burn on the bathroom windowsill.
A broken folding black chair.
“Furniture-moving” scrapes on the new paint job in the bedroom.
Missing sliders that used to be under the bed legs.
An inch-long piece of wood gouged out of the back windowsill.


Dried shit splattered around the toilet bowl.
A filthy bathtub with a slow drain.
The toilet flushes slowly, almost not at all.
The $29.99 Ikea floor lamp is just propped into the base, no longer screws in.

I went to wash my hands, but there were no towels. Where were the towels? Oh, there’s one… the Spider-Man towel staff members received one Christmas at Marvel. I suppose that makes it rare, almost collectible, although it had a strange smell to it even when it was new. And there it is, wet and in the trash. I contemplated it for a minute and decided to leave it there, along with one of the bathmats and someone’s 2-foot-tall bowling pin. Sometimes it’s better not to ask.

Missing plastic floor protector.
Lack of keyboard tray that used to be attached to computer desk.
Refrigerator shelf parts missing.
Gaffer's tape on the window sash.
Drink stains on the slate mantel, grease and food stains on the stove.
And coins. Coins all over the place. Mostly pennies.

On the plus side, I was now the proud owner of 7 boxes of Kraft Macaroni & Cheese, 4 cans of Spaghetti-O’s, a men’s belt, a hair clipper set, two Saturn car keys, and a fancy TV antenna.

Unfortunately, there’s no way of knowing which tenant decided the floor was better left unprotected, or that it was easier to put parts of the refrigerator in the closet than to put them back on the shelves. Three resident men and one girlfriend lived in my apartment while I was gone, and the girlfriend ran up a $750 phone bill.

You win sometimes and you lose sometimes. My first Jersey City tenants were incredible. They left it in better shape than they’d found it in. That was the year the floor refinishers sanded through the thermostat wire. I quit charging Aaron and Brito altogether after they had to live through a few months of that winter.

The father of one of the tenants had wisely said to me “how will you know which tenant broke what?” He was right. I had no way of knowing who had broken what. Maybe one tenant was an angel, the other a slob. There's no way to know.

The broken chair and broken lamp went out into the trash immediately. The plastic floor protecter had been behind a bookcase and now has ripples that reminded me of a pleasant stream. The slow-running toilet taught me a few things I did not know about plumbing—did you know that you can scratch up the toilet bowl with a snake? And I finally had an opportunity to use that plunger that Shannon Wheeler had left in my place on Avenue B in 1996.

I called a friend and asked her for her house cleaner’s phone number. She told me to include a cleaning fee next time. Good idea.

Michael Kraiger dropped by and put the refrigerator back together, changed the “tall-guy” lightbulb, and helped me drag out the refrigerator so that the microwave could go back into its custom-built hutch that Turbo installed. I felt terrible looking at the dirty fingerprints I found on the walls. Turbo had worked so hard on finishing and painting my place. He’d painted the entire place, fixed the sidewalk, caulked the window, re-finished the fireplace, restored the airshaft windows by precariously hanging outside on a fire ladder, painted the tin ceiling, restored the closets, stripped the century-old hinges, and fixed the furnace while he was here. For free. All I gave him in exchange were Mr. Softee boxer shorts and a Mr. Rooter action figure (Rooting is not something you do to the drain in Australia). And the year before? He was bored so he’d re-modeled the kitchen.

“They were very nice boys,” said neighbor Fran regarding my tenants. Casey the next-door neighbor agreed, although he was skeptical of their choices in clothing. But the doctor--! Everyone loved the doctor. He’s the one with the phone-offending girlfriend. I suppose they liked having a doctor in the neighborhood.

The neighbors in the building were less charitable. Duane had cleaned the cigarette butts up in the backyard several times. I apologized profusely, but privately I wished he'd done this again recently... a quick look out the window showed how I'd be spending a morning next week. Picking butts out of a potted plant.

I put on latex gloves and got to work. Next time, I thought… there isn’t going to be a next time. I called Jessica Del Forno to put the place on the market. I wasn’t cut out to be a landlord. 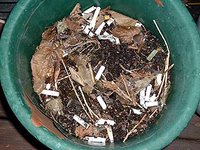 It's now six weeks later and I've just discoverd that someone left a copy of the "Big Titty Girls" under the DVD player.

Wonder which tenant that was.