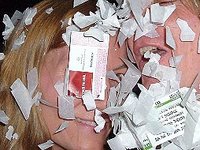 In my life, it has never been more true to say that it was the best of times and the worst of times.

I started 2005 at a job that I intensely disliked, working in a dysfunctional children's publishing company doing borderline monkey-work as if I were just starting out in the editorial world. But it was easy aside from the fact that no one liked each other, plus the money showed up as scheduled. And it was necessary—the dollar's plunge against the euro meant I'd spent the last of my money on living in Barcelona at the end of 2004, a cheap Ryanair flight from H.M.

Herr Marlboro was in his last year of university in the UK. He spent his 2005 Easter break in Jersey City. We gorged ourselves on a ridiculously indulgent Holiday Inn package in Atlantic City and went to see strange off-off-Broadway productions in Manhattan, including one where we were covered in shredded paper. We cooked. We watched Netflix DVDs. I (ineptly) tried to cook him bratwurst. He rode my bicycle around the edge of Manhattan.

Bells at the nearby Catholic church signified the death of the Pope on one of H.M.'s last days with me. On the way to the airport, he was quick to remind me that he was never going to want a traditional life. As if I ever would want that. Bah. If I wanted a traditional life, why would I have ever let go of Mr. Perfect, the man in my life before H.M.? He had it all… stable job, beautiful house, quick wit, good looks, and the ability to fix things. Ah, well, there was that small matter that I was forbidden by law from staying with him for more than 90 days and he was adamantly petulant about rectifying my legal status within his country… but that's a pet peeve from 2002, not 2005.

Herr Marlboro went home and Mr. Perfect showed up. He kindly renovated my entire apartment out of the goodness of his heart. He slept on the sofa 10 feet away for six-and-a-half weeks. He charmed the neighbors and all my friends with his great personality. We had barbecues. We went camping. We had fun.

I was confused. I am still confused. I fled to H.M. once for the weekend, seeking his reassurance. H.M. told me Mr. Perfect was hanging around because he obviously wanted me back. "Then why didn't he try?" H.M. didn't have an answer for that. Like I said, confusion reigns. It is entirely possible that Mr. Perfect just thought I was swell and wanted to help me, and had no ulterior motive.

Then, it was off to Uganda. I presume that H.M.'s acquaintances there thought me a bit odd, this American girl who was chained to her laptop coloring Donald Duck comic strips. I didn't fit in at all with the German expats, but they were all so sweet and open-minded and a few of them were terribly clever. I was the odd-one-out but I felt privileged that they let me in on their l'il world.

I was stressed and closed when I first arrived in Uganda, and I wasn't sure I could deal with living in the jungle full-time with a man (my "fear-of-intimacy" may be trumped by H.M.'s but it's still formidable). So I rented a flat in Kampala. I spent the summer bouncing back and forth between Murchison Falls and Kampala. I thought I'd get tired of the lack of hot water and lack of things to do at Murchison, but this was not the case. Mostly, I scheduled in visits to Kampala because I didn't want to stress the relationship of two relationship-phobic people.

We enjoyed our time together, even when it was about swatting mosquitos and being chased by hippos. And I enjoyed the free-wheeling atmosphere of Africa. I loved it, actually. We were once caught in a storm and H.M. held the tent up while I gathered my stuff. We listened to the hippo eating grass next to our heads from our bed on the verandah. We cooked steak at night and I experimented with making baked goods for the workers by day. We read books by Mag-Lite under the mosquito net. We watched the sun rise over the Nile every morning. In the beginning, he brought me coffee in bed. By the end, I was up first and had his coffee waiting for him.

My only regret is that such a fabulous adventure was marred by the aftermath.

An incident drove us apart. H.M.'s response to the incident was... not ideal. I left. I ended up alone and sick in a Namibian hospital. H.M.—wracked with guilt—disappeared and avoided me for months. I was devastated at his disappearance.

Alone in Namibia, I was sick and numb. I realized that I was not half-as-strong as I'd imagined myself to be. I colored comics. I worked on the book. The book now rings hollow. I've really lived in Africa now, not just danced along the edge of it. I learned to let people into my life at exactly the moment H.M. removed himself from it. I've experienced fundamental change in Africa in 2005 and I'm writing a book about a merry chase across the continent in 2001.

I would probably still be sitting in Namibia today if my next-door neighbor hadn't gotten fresh with me. I got off my butt and moved to Cape Town, and again, the only reason I left Cape Town was that a nice man asked me out. I fled, prepared in no way for so much as a cup of coffee with romantic overtones.

Trains and buses took me overland through Lesotho, South Africa, Botswana, Zambia, Tanzania, Kenya, and finally back to Uganda. I thought myself totally recovered by the time I reached Tanzania. I was happy and my head was on straight. There's nothing like being in motion. It distracts you, keeps you from facing grief.

I'm home again and feel fragile and weak. Sitting in one place means avoidance is not an option. The thoughts and emotions roll in while I work, and I am envious that H.M. is still busy in Uganda. I want to be happy and running around Africa too, instead of sitting home on New Year's Eve, wondering if I can work up the enthusiasm to go to parties or if I might not be better served sleeping through the end of a rotten year, and hoping the next one brings me something better.

Kuwait waits. I'll be in motion. I'll have no time for self-pity.
Posted by Marie Javins at 1:48 PM

YES, the table will probably still be here when you get back. Don