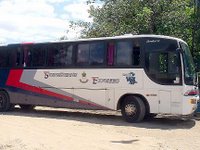 Four Zambians and I stood alongside a muddy ditch at six in the morning. We were all brushing our teeth with the aid of bottled water.

The Lusaka to Dar Es Salaam Scandinavia Express bus sat behind two Executive buses and one truck, fourth in line for the border’s 7 a.m. opening. No one was sleeping—we’d all had quite enough of sitting on the bus, having boarded it 14 hours ago.

I nearly hadn’t gotten the ticket. I’d booked over the Internet. Things went smoothly and professionally—until I’d showed up in person.

“Sorry, madam, you should have been here two to three hours ago. We have sold all the tickets.”

I smiled pleasantly at the manager and argued without raising my voice. Traveling in India in ‘98 had taught me that joking and laughter was often the best way to get what you need. Africa was similar, with the important distinction that no amount of arguing could produce results in seemingly inflexible situations, whereas in India there always seemed to be an unexpected solution. I held out hope. The manager was Indian.

“Then we have a problem. I have a document here—“ I motioned at my laptop. “—that says I must be at the ticket office an hour before departure to collect my confirmed ticket.”

“Yes, but you see my position. All of the tickets are gone. I can get you on tomorrow’s bus.” He gave me a huge smile in return.

“Ah, but this is a big problem for me. Because if I must stay in Lusaka for a night, I must pay for a hotel.” My logic was irrefutable and my chuckling friendly. My ulterior motive: I did not want to stay in the huge-hearted but aging Chachacha Backpackers dorm. He nodded sagely and smiled again. A smile standoff.

The manager went away for a while and I stood in the same spot as instructed, sweltering in the Zambian afternoon sun.

Eventually, I was in a front-row staff seat on an air-conditioned coach, bound for Dar.

Being a front-row spectator in a Zambian bus had serious disadvantages. I bore witness to a roadside fire, a crashed tractor-trailer sprawled across the road, and a seriously injured pedestrian who was being rushed from the scene of the accident to a pickup truck. I did not complain when another passenger left the bus and the staff moved me back into row 9. From there I could see only the head in front of me and Jackie Chan on the video screen.

Other emergencies were more of a personal nature. An unexpected early period is not exactly every girl’s dream when it occurs in Hour 3 of a 29-hour bus journey. Fortunately, I found a single useful item deep in my daypack. Then, in the morning, I was forced to retrieve and open my luggage for Customs at the border. I cheerfully yielded to the Customs Officer’s demands after the staff dragged my backpack out of the bowels of the bus, palming some of the contents of my toiletry bag.

I made some new friends at the border—one of them was a Tanzanian boy in a “NSW 1999 Rowing” T-shirt. “Are you in New South Wales Rowing?” I asked him. The boy looked at me blankly and offered to change my Zambian kwachaa for Tanzanian shillings.

“That shirt is Australian.” He broke into a smile and appointed himself my border-escort, even though I’d already changed my money. My other new best friend had on a stylish Meadowlark Lemon Fubu Harlem Globetrotters shirt. I had to mime basketball to explain his uniform to him.

The thriving African secondhand market means that everyone else was dressed better than I was. The men on our bus sported Sean John and Fubu designer clothing. The women all looked fantastic. I wore my grungy, faded Lara Croft-esque outfit and Tevas. My T-shirt had shrunk unacceptably small long ago and the Express 3/4 cargo trousers looked pretty good in 2003 when I picked them up on sale on a walk through Jersey City’s Newport Mall. Now as I speculated that they could be indelibly stained, I tied my sweater around my waist.

Fashion wasn’t the only area where I was hopelessly outclassed. Every person on that bus had a color-LCD mobile phone featuring all the gadgets. People’s pockets whirred and buzzed around me as incoming text messages were received. It seemed that half the bus knew exactly where we were at all times by consulting their phone GPS systems. My own cheapie had a screen that lit up blue, a cracked housing, and hadn’t gotten a signal since South Africa, no matter which of my four SIM cards I tried.

Border formalities took a few hours, and we were finally off for a day’s drive through Tanzania’s southwest. Last time I had taken the TAZARA train along this route and it had taken forever. As in days. Days and nights. It made me swear off the TAZARA train.

This 29-hour bus ride gave me new appreciation for my Kampala chiropractor’s stance—she refused to stay on any bus longer than six hours. She’d just get off wherever she was at the end of six hours and would continue the next day.

Everyone was punch-drunk and stir-crazy by the last few hours of the journey. We all howled with laughter at the “scary” moments in Anaconda. Whenever an elephant was spotted along the road, someone would point and fifty heads would lurch to the side. Darkness fell—again. We finally pulled into Dar at 10 p.m. My feet and ankles were—alarmingly—the size of baby elephant ears. I mumbled an inadequate good-bye to a pal I’d made on the bus and stumbled into a taxi. I didn’t even negotiate and accepted the inflated price of $4 to my old standby, Econolodge. It’s around the corner from Safari Inn and Jambo Inn, but marginally better. I’d recovered numbly from September 11th in Econolodge.

The manager took one look at my bleary-eyed state and let me use his Internet for free. I stumbled into my room late and hiked my elephant-feet up on a pillow. My bus to Nairobi was booked for the morning after tomorrow. My last thought as I went to sleep was that there was no way in hell I was getting on another bus that soon. Nairobi could wait.
Posted by Marie Javins at 3:08 AM

If you're taking digital pictures while you're in East Africa, check out this cool way to share your photos with people around the world who are interested in Africa and Swahili: the Kamusi Project Photo Uploader.