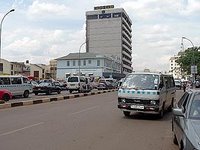 On my last afternoon, in Kampala, when I should be coloring comic books, I’m instead worrying about Uganda.

And I’m not the only one. The newspapers are full of doom and gloom. The people are pessimistic. No one is quite sure why the country is going down the path it’s going and why President Museveni is doing what he is doing.

It’s like this: The President will almost certainly win re-election. BUT to do so his government had to first revoke term limits. Term limits, it can be argued, are checks and balances that rein in even good, popular politicians. But then, it could be argued that Uganda is a fragile new country that needs experienced leadership. Either way, it is worrying.

Then there was this whole song-and-dance that he was the reluctant third-term candidate. Why anyone bothered with this charade is anyone’s guess, as it’s been clear all along that he would run again. Why else revoke term limits? He finally declared his candidacy yesterday. On the same day he declared his intent to provide free secondary school education for all of Uganda’s children. (They already have free primary school.)

On the other front, the competition is being dealt with. The opposition candidate is—or was—Dr. Kizza Besigye. He ran in the last election and gained a lot of ground, but still lost. He had been in exile in South Africa and returned just a few weeks ago. After popular rallies around the country, he was arrested along with several other members of his party. The charges are of being involved with a shadowy perhaps-existent anti-government group in Congo. And for good measure, they’ve charged him with something repulsive to everyone—rape. For something that allegedly occurred many years ago.

What isn’t clear is why the government did not extradite Besigye if he really did these things. The answer clearly seems to be—he didn’t.

I don’t know anything about Besigye’s platform or if he’s a good man or a decent politician. But I do know that this all looks highly suspicious, and the people of Uganda are fed up with having their leaders deteriorate into dictators. Some are so fed up that they took to the streets earlier this week. It won’t be the last time.

Others are puzzled and confused, annoyed at these actions. No one seems able to work out why Museveni bothered. Surely he’d win anyway.

On another front, the LRA kooks have been active too. People are dying up north. Lots of people. Maybe the President needs to thing less about the competition and more about the LRA.

I love Uganda. It’s a friendly place, full of fresh food and easygoing people. But it doesn’t really love me back. It doesn’t even know my name, as Marie is unpronounceable by most. Mary is the commonly used form.

I’m leaving tonight. In an unexpected (but typical of the serendipitous relationship we've always had) coincidence, Herr Marlboro's Vater flew in at exactly the time I was due to report for my 11:50 pm flight. I'd spotted the DED-mobile in traffic and was surprised to find H.M. in Kampala. I sent him a somewhat rude email and in response he bought me a cappucino and drove me to the airport. It would be an exaggeration to say all is well but at least we are on speaking terms.


So, am I ready to go home? I’m ambivalent. Sure, it kind of sucks to live alone and have no friends on an entire continent. But there is still something so gloriously appealing about living on the road, carrying all my possessions from bus to bus, and trusting total strangers to take care of me. Some people simplistically call this lifestyle “freedom.” I’m not sure what I call it. I associate “freedom” with the inability to articulately think beyond a 7th grade level about personal responsibility. So let’s not call it freedom. Let’s just call it fun.

P.S. The title of the book is… No Hurry In Africa.
Posted by Marie Javins at 8:00 AM

Freedom's just another word for nothing left to lose. (Hmm... maybe that's why you associate freedom with the inability to think beyond a 7th grade level about personal responsibility... too much hearing a song made famous by Janis Jopin who learned it from Arlo Guthrie who learned it from Kristopherson.)

Glad you are coming home! There are people in the USA who love you.

I think that your next trip should be New york city and the surrounding suburbs. A bit more familiar but just as much drama. I hope you are well!

Ha ha, and if you believe I spotted the DED-mobile in traffic, let me introduce you to my friend the SITEMETER. It tells me all kinds of interesting things about who is reading my blog!