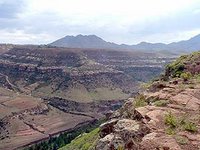 “You asked for this,” I chastened myself. “It’s what you wanted, so deal with it.”

My right shoulder was burning, crushed as it was against the hot, metal sill of the minibus. To my left, a traditionally built Lesothan woman in a sweater had taken over ¾ of the bus seat we shared. Vendors poked beaded necklaces through the open window. Flies buzzed in the center of the stationary bus, attracted by the scent of fries, ice pops, and cold, uncooked sausages stored under the seat.

I could have been enjoying coffee in Cape Town instead of sitting in this bus waiting for it to fill, here in Lesotho, the “Roof of Africa.” But to my mind, me on any bus is more the African basement.

Traveling by public transportation is an endurance test. I’d forgotten how painful it could be. I’d romanticized “the road.”

I’d thought I’d done all right at first, scoring two seats for myself on the overnight Intercape Mainliner bus to the Lesotho border.

My delight was short-lived. At Durbanville, the double-decker coach filled up. First, a thin woman sat next to me. But then she moved downstairs, leaving me with a large chatterbox. My new seatmate—the stranger I’d try to sleep with for the next 12 hours—was a 60’ish Afrikaaner man who had the annoying habit of asking how I was sleeping every time I was about to drop off.

I slept very little, and was not at my most chipper when I lined up at the South African border for my exit stamp.

The immigration officer paged through my passport. Then, he asked me to follow him.

“You have overstayed your visa. The fine is one thousand rand.”

“I cannot pay that.” My answer was firm but I felt panic creeping in. “What do you mean? I thought I had 90 days.”

My mind went back to when I’d entered South Africa. The immigration office had asked me how long I would stay. I said “three weeks.” I didn’t realize she written exactly that on my entry stamp.

The officer showed me where she’d written “1031” followed by some scribbles. I’d read it as 0311, and thought that even though I hadn’t gotten 90 days, I’d still be fine. Today was November 1.

The immigration man told me to sit in a concrete room for a while. He went away to deal with other problems while I thought about my options.

They were limited to 1) paying (but I was not carrying one thousand rand, which is a lot of rand) 2) refusing. I wondered if I could just demand he take me to jail instead. I didn’t think he would, and if he did, I wondered how long I’d have to sit in jail to make up for refusing to pay. Would they call the US Embassy? What happened in situations like this? There was no way I was going to pay anything—I was entitled to 90 days.

Finally, he took pity on me. Or he asked his supervisor, who couldn’t be bothered with such a silly problem.

“Next time you come in,” said the officer, “you must look at this line and make sure that they have written 90 days. I don’t know why they didn’t.”

I crossed Maseru Bridge, leaving the first world to enter the third.

A minibus conductor ushered me into a rusty heap of a minibus. He forced another passenger to hold my backpack on his lap. I was squeezed into the back seat with three other full-sized adults and driven to the middle of Maseru through diesel-choked traffic. My cell phone lost its signal. I was out of South Africa and in the mountains.

More endurance tests were to follow. I was hungry, thirsty, and tired.. The Malealea bus took three hours to fill up, and when we finally got moving, the one-hour ride took two hours. Plus the driver put in a cassette tape and turned it up so loudly that no one could speak. Perhaps this was a deliberate strategy.

I’d called ahead and been told that it was a one-hour journey and I’d never wait too long for a bus to fill up, plus I was dehydrated and hungry by the time I stumbled into reception at Malealea Lodge. I was cranky and not very nice to the man sitting at the front desk. In spite of this or because of this, he gave me a good discount on a pony trek. And he gave me lunch, which made me calmer and more enjoyable company, even for myself.

The pony turned out to be a horse but the guide was great. He talked just enough, but not too much. He led me through farmlands and mountains that reminded me of the Grand Tetons, with a big gorge in the middle. I thought that almost, maybe it was worth the trek up from Cape Town. Plus a 29-year-old Dutchman assumed I was his age, which made the trip even better.

I waited for the 6:30 a.m. bus back to Maseru the next morning. A Lesothan man asked me a lot of questions I could not answer. “Why do tourists leave their homes and spend so much money to see other countries?” “Why do they go in buses with a guide instead of on the minibus?” But most interestingly, he told me “wow, Ugandans are so black.” Which seemed a strange thing to say, but once he’d pointed it out, I noticed that his brown skin was much paler than a Ugandans. Strange thing to comment on, but he was not incorrect.

The return bus was as loud, hot, and hellish as the incoming had been. Lesothans turned out to be helpful though, and everyone was keen to help me find my way back to the border. My short visit to their country had left an impact. As I stood in line, a South African grandmother insisted on telling me that Lesotho people have great respect for others. I’d have to agree.

Now I sit in Bloemfontein. To the north is the long trek on buses and trains to Nairobi. To the south is the easy life of Cape Town, with nice food, atmospheric lodging, good plane fares, and a nice man with a large phone bill, one who would be delighted to take a hopeless case out for a meal even after she’s spilled all about her sordid recent past. Cowardice or not, the pragmitist in me is reaching for the emergency brake. But I still have a few hours to choose before the transport leaves town… if you are going to vote, best do it soon.
Posted by Marie Javins at 8:18 AM

That sounds like the NYC Subway at 9;00 in the morning.

Oh, dang, I bet I missed my chance to vote.... but then, I don't know which to vote for. Endless hours of discomfort in cramped space on uncomfortable seats versus a very short period of airplane discomfort? Diesel and human-scented air versus nasty, germ-laden airplane air? Dangerous ill-maintained minibuses versus dangerous ill-maintained airplanes? My default would be to make the choice based strictly on economics, including the extra nights in expensive Cape Town.
But, since we haven't had a posting since yesterday morning, Marie must've taken the slow route, and she's still sitting on a train or bus somewhere.
However, I have great faith in Marie--no matter what, she'll get a good story out of it.